In the Garden of Beasts

In the Garden of Beasts: Love, Terror, and an American Family in Hitler’s Berlin
© 2011 Erik Larson
432 pages 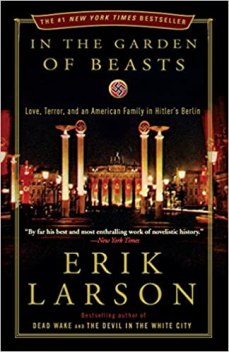 In 1933, Franklin D. Roosevelt needed a man for a post no one wanted to fill: US Ambassador to Germany.  He found one in  William Dodd,  a southern academic who had interests in serving as a diplomat.  Dodd hadn’t expected a high-stakes posting like Germany, but resolved to do his utmost to promote the ideals of a liberal democracy and American interests.  Although Hitler and his Nazi party had already acquired a reputation for thuggishness,  Dodd viewed humans as essentially rational, and thought the man could be reasoned with —  and if not, the demands of high office would surely check his excesses.   Instead of influencing Germany to turn away from the path of horror it pursued — first at a snail’s creep, then headlong —   Dodd could only watch in bewildered despair as Hitler’s domination of Germany  became complete.   His frequent warnings that Germany was changing for the worst, and that Hitler was preparing to dominate Europe as his thugs now controlled the country, went unheeded.    In the Garden of Beasts is an interesting if unnecessarily salacious chronicle of the Dodd family, as they witnessed Germany’s transformation into a nightmare-state.

I found Dodd himself a very sympathetic man; a soft-spoken academic, a historian of the Old South who viewed its plantation elite with derision,   not admiration; a committed Jeffersonian who practiced frugality in spite of his government appointments,  even moderating his use of the telegraphic cable system to  minimize costs.   His prudent simplicity was out of place in Germany,  increasingly dominated by flashy decadents like Goering and Rohm.  Although Dodd quickly found sympathetic minds in Germany — many were uncomfortable with Hitler’s constant harping on the Jews, and his extralegal influence through militant organizations like the S.A. —     through his eyes we see a Germany where Hitler is plainly on the ascent. All of society is being ‘coordinated’ to support and promote the Nazi message;    Germans themselves, like the Chinese a decade later, are being molded by fear  to become tyrants of one another, bullying one another into conformity.  When Hitler institutes a violent purge of the S.A,  also using the opportunity to silence dissidents, any hope Dodd has for pulling Germany from the brink is lost.    Increasingly in poor health from his alienation in Germany, and frequently undermined by those in the State department who believe he is needlessly antagonizing Hitler,  it was a mercy for Dodd to finally resign and return to his farm. He probably would have done much earlier had he known his daughter was bedding the head of the Gestapo,  a Soviet functionary with ties to the KGB, and various and sundry others.  First enamored of the Nazis, then of the Communists, she cuts a very poor figure — though she must have been most charming to have so many men trying to get a sliver of her attention.

Dodd’s daughter’s sex life constitutes far too much of the book for me, being more interested in the slow corruption of Germany. I appreciated how early this book is set;  usually when I read histories of WW2, the SA are quickly covered in Hitler’s rise,  but they’re major players here  — and absolutely hate-able. The SA constantly parade through Berlin and beat those who fail to stop in their tracks, and they’re such odious thugs that the reader practically cheers their demise during the night of the long knives .  (Or at least, he would if Hitler weren’t also using the occasion to disappear a few critics, and intimidate his last significant opponents into silence.)   Although I can understand why the US was reluctant to be drawn into yet another European bloodletting,  Dodd was a persistent and credible witness that the world would soon be at war whether it liked it or not.

Citizen, librarian, reader with a boundless wonder for the world and a curiosity about all the beings inside it.
View all posts by smellincoffee →
This entry was posted in Reviews and tagged Germany, history, Nazi, WW2. Bookmark the permalink.

4 Responses to In the Garden of Beasts