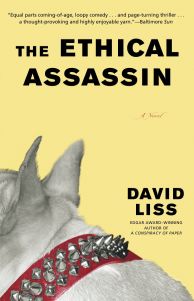 A few weeks ago for TTT,  I mentioned David Liss as an author who made me smile, and happened to think  about the first novel I read by him, The Ethical Assassin.   It would prove to be an outlier, because everything else I read by Liss was historical fiction, usually thrillers with a business or political angle.  The Ethical Assassin, however,  was practically contemporary — set in the 1980s.   It wasn’t the first time I’ve thought about Assassin over the years, as it was a work that combined philosophy, satire, and a crime thriller with good effect.  Last week I decided to re-read the book to see how I responded to it, nine years later.

The Ethical Assassin opens with a young bookseller named Lem Altick standing in a trailer, dumbfounded as his two most recent customers are shot dead before his eyes. Their assassin, Melford Kean,  proves affable, assuring Lem that  he’s in no danger…provided doesn’t try to  create a fuss. Rest assured, Kean says,  those two deserved it.  As Lem and the reader experience more of the story, we tend to agree: “The Bastard” and his speedfreak girlfriend were mixed  up in a racket that spanned from animal-stealing to meth-dealing,  in cahoots with a closet pedophile and a cop who likes to pull over women and demand sexual favors in return for not giving them tickets on trumped-up charges.

All that’s fairly dismal,   and if there weren’t something worthwhile in all this, I would have never taken to the book back in 2011:   I’m not one for reading about depravity. But Assassin had a philosophical  curve to it. Kean & Lem were not able to go separate ways, but were forced by circumstances to work together against a mutual threat. As they work,  Kean engages Lem in debates about morality and ideology,  and we learn that he’s a vegan activist whose ire was tripped against this gang primarily because of their various animal abuses — from stealing pets for lab tests, to using a confined pig farm to mask their meth lab.

The question that has made this novel stand out for me, though, is Kean’s query to Lem, something of a test: why do we have prisons?  Kean and Lem argue about them, with Kean pointing to high recidivism of the system  and the idea that prisons serve as academies of crime,   sending people deeper into criminal activities.  Those who ‘serve their time’ are societal pariahs, often barred from useful employment — is it surprising  that they resort to earning money through illicit means, like narcotics? In the end, Kean suggests that DC promotes prions because they increase criminal tendencies, effectively converting people who might push for meaningful reform into common criminals,  easy to dismiss.

Although The Ethical Assassin is still amusing and thoughtful, this time around I was far more aware of how  awful most of the characters were — not badly written, but just awful, awful people, and the philosophical interest doesn’t  redeem it. I probably won’t be reading this one a third time, but I’m glad I revisited it for the humor at least, and it reminds me that I need to finish reading his 17th century crime/business thriller series.

Citizen, librarian, reader with a boundless wonder for the world and a curiosity about all the beings inside it.
View all posts by smellincoffee →
This entry was posted in Reviews and tagged crime, David Liss. Bookmark the permalink.