Posted on April 8, 2020 by smellincoffee 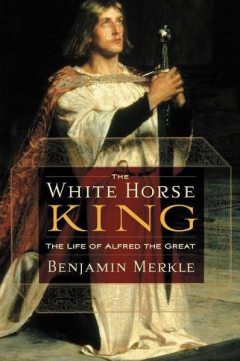 It reads like the best of high-stakes adventure stories: a young,  conscientious king watches as his neighbors fail to unite to the creeping threat of the Norsemen, and fall in their time, one by by one. Surrounded by the savage warriors from the sea, betrayed by his own lords,  he and his few supporters flee to the marshlands – there to wage guerilla war against the pagans,  until at last on a feast day of the Church he rallied an army and stuck for Wessex’s  redemption – and laid the foundation for England.

I read that story in Bernard Cornwell’s early Saxon Stories books, and I astonished to later  learn that it really happened. The Saxon kings of Britain usually get short shrift by historians of Great Britain, who prefer to begin with William the Bastard,  but there are many lives worth celebrating from those days, and Alfred’s is chief among them.  The White Horse King strikes me as mythical history – not because it’s untrue,  but because Alfred is thoroughly lionized (or equinized, in this case),  his struggle connected to an eerie image of a horse written in chalk in the English countryside,  and on his shoulders  put the beginnings of England.  We see him here not just laying the groundwork for surviving future Viking invasions – the network of fortified towns, for instance – but the groundwork for England itself, in aggressively promoting education and the establishment of the common law.  The

I loved reading this history —  I’m very partial to narrative history, and this one especially sings.  That said….its author is a classicist, not an historian,  and as much as I like narrative histories I respect my training enough to know that the reality was probably a bit messier.

Citizen, librarian, reader with a boundless wonder for the world and a curiosity about all the beings inside it.
View all posts by smellincoffee →
This entry was posted in history, Reviews and tagged Anglo-Saxons, Britain, history. Bookmark the permalink.

2 Responses to The White Horse King