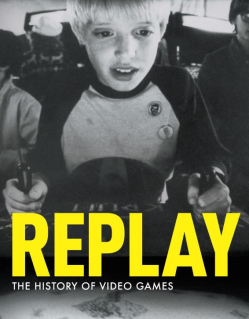 Video games emerged in the late 20th century as a completely novel form of entertainment.  Replay recounts the history of how programming experiments and text-based adventures were transformed first into a new hobby with widespread juvenile appeal, then a serious platform for storytelling, and then ..became ubiquitous.

This Replay is comprehensive, covering consoles, arcade machines, and home computers; it is also international, examining games/platform developments in Japan, Korea, Russia, France, and England. Donovan moves chronologically through the development of early computers and game programs associated with them,  their spinoff invention of gaming consoles, and the establishment of video games as art and entertainment. By the early nineties, video games encompassed such a wide variety of genres that the author examines the development of different genres — role-playing games, first-person shooters,  simulations, etc —  as they emerged and grew popular. He pays special attention to particular machines and games that transformed the industry —   Ultima and GTA3,  the Atari and the Wii, and also includes information on business rivalries (Nintendo v Sega) and the drama of software firms falling out with one another. It culminates with the arrival of games on smartphones, though that era — the current one — is only introduced, not delved into itself. Many more games and platforms are addressed in the book, of course, and it is appended with an extensive list of influential titles.

While Replay is a straightforward history of how the software and hardware developed,  it also steps back and looks at the larger picture, pointing out how the games grew with their users: successive platforms advertised themselves to teenagers and adults, trying to shed the image of videogames as merely for kids.  Gaming in general has gone back and forth on plot vs action:   while one might dismiss DOOM and Wolfstenstein 3D as primitive shoot-em-ups  that were later surpassed by shooters with more developed plots, like Half-Life,  in reality DOOM’s designers  were rejecting a tendency in earlier games to take themselves too seriously by returning to sheer, unbridled action. DOOM guy  didn’t have a personality: he existed to mow down demons from hell. Users also grew with their games: part of the interest for game designers was that they could rewire players brains by putting them into positions and confronting them with choices that they would never encounter in their real lives.  Will Wright, for instance, co-founded a company whose original intent was educational games — but he did so through “software toys”, games that were fun, but also taught players how intricate systems like an antbed or a city functioned.  Wright’s company promoted a feature of PC games that made them especially popular: customization.   DOOM allowed players to create their own maps, but even before The Sims had shipped, Maxis had already made tools available for people to create their own clothing, wallpaper, and floors in the game. Later the game was opened to custom objects (for the homeowner who wants a decorative cannon, say), and both the original game and all of its successors have promoted user-created content through their Sims Exchanges. Customization isn’t merely about expanding the game:  as a teen, I marveled at the stories of people who became interested 3D modeling because of their tinkering with The Sims mods or crafting Civilization III units.  Donovan mentions that games have also become the stuff of independent creative ventures: people use video taken from gameplay to create stories, and function as “actors” in the game to get the shots they need.

While its subject is games, Replay is fairly serious about the subject — it’s not a “fun” read like Masters of Doom, but those who have a real interest in games as an industry and hobby will appreciate its heft. I noticed minor errors sprinkled in (a reference to “Richard” Heinlein as a prominent SF author, say), but nothing too substantial.

Citizen, librarian, reader with a boundless wonder for the world and a curiosity about all the beings inside it.
View all posts by smellincoffee →
This entry was posted in Reviews, Uncategorized and tagged arts-entertainment, history. Bookmark the permalink.