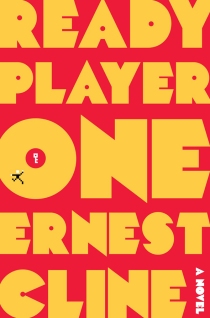 Who knew that School House Rock could save the world?  When an eccentric genius dies and leaves a will laden with eighties pop culture references, the entire world is called to an epic adventure. The mission: to find an Easter Egg within his creation, the world’s most popular massively multiplayer experience, the Oasis. Completing the quest — deciphering clues to find keys that will lead to other clues and finally to the prize itself — will earn the winner half a trillion dollars as well as control over the game itself.   The premise is intriguing; the execution is a glorious triumph of geek culture starring a poor orphan who unwittingly becomes a global hero.

We enter a future where the ‘real world’ is increasingly dismal, decaying under  a Great Recession that has lasted decades, largely fueled by…the lack of fuel, because the oil age is over. Poverty and overpopulation are both extreme,  forcing people to live in cobbled-together skyscrapers made of stacks of trailers. That’s where our main character Wade Watts is from.  But there is an escape — the Oasis, a kind of communal holodeck in which different planets allow people to have adventures in different kinds of worlds: there are fantasy environments for swords-and-potions questing as well as science fiction ones in which players might do their adventures from the Starship Enterprise. Wade, for instance,  goes by the Oasis name of Parzival and does his questing in either an X-Wing or Serenity. There are user-created worlds, too: imagine the Oasis not only as a mass gameworld, but one like the internet which is constantly being expanded by its users.  People lose themselves in it utterly through haptic suits that allow them to ‘experience’ what they’re seeing in-game; one character doesn’t leave his real-world apartment for over six months, because he doesn’t have to. He can order real-world food delivery through the Oasis.

Although there is appeal in seeing the technological developments of this world, Ready Player One’s attractive genius lays in the sheer abundance of geekery. It’s incredible that so many references to various classic video games, eighties movies and music, and science fiction can be worked into to so small a book without becoming distracting, but it somehow works. One minute players are dancing to eighties music, the next they’re being assaulted by a hit squad with laser weapons and then rescued by a wizard named Og the Great and Powerful. This book isn’t just fun: if you’re a gamer who also shares some of the creator’s interests (and they are many), it’s a ball.   The quest’s actual demands and latent demands are both incredible:  not only does a player have spend years watching eighties movies, listening to music, and playing games like Zork , but in the actual quest they might be called on to  navigate through a TRS-180, then jump through a movie poster and play the lead role in Wargames, reciting every line perfectly.  And the author isn’t just dealing with the top-heavy cream of geekery,  Star Trek geeks and LOTR readers:  his references are obscure. At one point a character searches a house for boxes of Captain Crunch to blow the toy whistle buried inside at the exact pitch used by John Draper to fool AT&T’s phone system into doing his bidding. There’s even a School House Rock moment, in which singing the opening bars of the song is crucial. (If you’re unfamiliar with SHR, check Youtube. It’s basically the series that taught me the Preamble and what a preposition is.)

Beyond this, Ready Player One is also a tightly plotted adventure novel. The main character is not alone with his friends in seeking the Egg: a powerfully evil corporation is also in the hunt, using all of its resources to bribe and threaten players into helping them, and their malicious will isn’t just effected in-game. The main character spends half the novel in hiding after an attempt on his life,  at its darkest point — when the corporation is seemingly at the threshold of winning — he has to execute a real-world plan to stop them from taking over.  Throughout the book, Klein subtly plays with the fact that the Oasis is both attractive and insidious: it offers players unlimited experiences at the cost of their real-world lives, a fact not lost on the characters. Doubtless many readers of the novel will share that experience, in part, having spent hours in virtual environments with friends, so much so that the game map seems to be a physical place in our minds. (Andy Weir, author of The Martian, wrote a short story called “Lacero” based on RPO’s Oasis, and wells more on the insidious aspect.)

Although I’m admittedly an ideal audience for this book —  the only references that went by me were the anime/manga/Transformer ones —   I’ve rarely been as enthralled by a novel as I have been with this one. This is definitely one to buy so I can re-read!

A note on the audiobook:  you get to hear Wil Wheaton refer to himself as “an old geezer”.  Wheaton is as usual a solid voice actor, and his presence adds geek appeal to a novel already brimming over with it. The only hitch is that some things don’t lend themselves well to being read, like chatlogs or a scoreboard.

Citizen, librarian, reader with a boundless wonder for the world and a curiosity about all the beings inside it.
View all posts by smellincoffee →
This entry was posted in Reviews, science fiction and tagged arts-entertainment, audiobook, digital world, science fiction. Bookmark the permalink.

14 Responses to Ready Player One