The Many Loves of Dobie Gillis

Posted on February 12, 2018 by smellincoffee 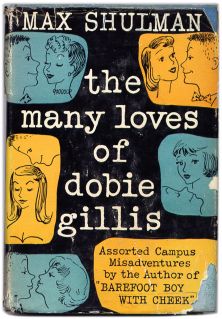 Imagine if PG Wodehouse wrote stories about a girl-crazy freshman at the University of Minnesota, circa late 1940s. That’s kind of what reader will find in The Many Loves of Dobie Gillis. I first read this book in 2003; it was a going-away gift from my high school librarian, who had to discard it but thought I would like it. She was right — I loved it. I loved the silly humor, the archaic slang (“Wow-dow”, “he fractures me”, etc), the presence of this world that was so obviously different from mine. The eleven stories are not sequential, or  integrated; unlike I Was a Teenage Dwarf, the Dobie here is not a fixed character. In one story he may be serious and cunning, and in another he’s apparently been given a dose of ecstasy, nibbling on girls’ fingers and jumping about “like a goat”. He studies, variously, mechanical engineering, law, chemistry, journalism, and Egyptology. Every story pivots on Dobie’s relationship with a girl, and more often than not he’s the one being led around by the ear, a bobby-soxed captain at the helm. Other times his desire to impress or woo a woman lead him astray. These stories are FUNNY — funny for the silly language, for the absurd scenarios, for the tongue in cheek narration. There’s also a lot of physical humor, something that’s hard to pull off in a literary medium. No wonder I took to Wodehouse so strongly when I first read him: he reminded me of this first brush with Shulman, who for me, never lived up to this book , no matter what else I read by him. (A lot of the other stuff was more bawdy than absurd.)

Read The Many Loves of Dobie Gillis. It’ll fracture ya.

Citizen, librarian, reader with a boundless wonder for the world and a curiosity about all the beings inside it.
View all posts by smellincoffee →
This entry was posted in Reviews and tagged humor, Max Shulman, short stories. Bookmark the permalink.

6 Responses to The Many Loves of Dobie Gillis