Posted on February 12, 2018 by smellincoffee

I have finally broken ground on this year’s study series with Everyday Life of North American Indians (© 1979), but before I start posting reviews and such I’d like to share some photos from a day trip I took with some friends three years ago. Our destination was Moundville, Alabama, site of the Moundville Archaelogical Park.

The park is the site of an ancient and abandoned city associated with the Mississippian culture. Several sites like these exist in the eastern United States: the largest place is Cahokia, in western Illinois (very near St. Louis, Missouri).  I’ve heard of another mound near Mobile, but it is not accessible by road. “Moundville” was abandoned prior to the arrival of Europeans, much like the city-sites of the Anasazi.  At its height, it may have had a thousand people. As with the Anasazi, it is believed that the inhabitants of this place merged or became the tribes which later lived in the region — in this case, tribes like the Chickasaw.   The park now contains 21 mounds, but early reports refer to 30. 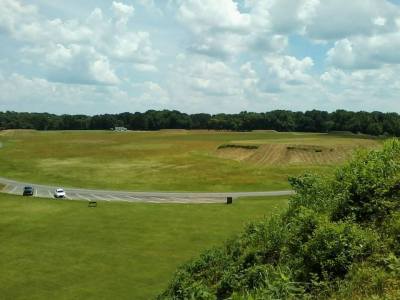 After entering the park at the visitor’s center in the left background of this photo, visitors will see them a wide field  dotted with grassy mounds, with a circular road connecting them. This photo is taken atop the largest mound, considered to be the chief’s by virtue of its size. 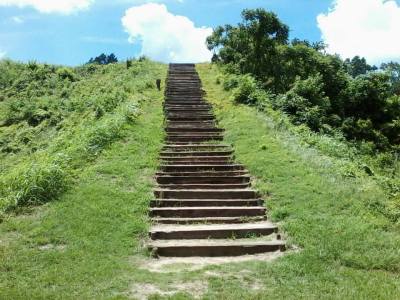 There are about 77 steps — I’ve never counted myself, but before I took this shot back in May 2015, a young boy and his father were descending, and the boy counted nosily. I’ll give him the benefit of the doubt!

At the far end of the circle is an air-conditioned museum, which houses artifacts and the expected information about the park, and the possibly political or religious uses of the mounds. 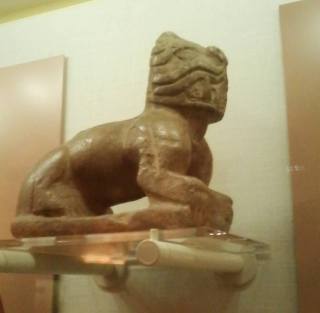 One of the exhibits. 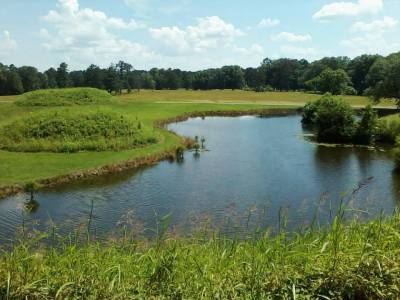 Behind the museum are a few smaller mounds, plus ponds formed from the depressions left from excavating the dirt to build the original mounds.

Another area of the park houses three artificial huts built in the style of residences, and each contain half-melted plastic figures which once resembled humans doing the sort of things one expects museum exhibits to do — burying people, marrying, that sort of thing.  In their melted state they’re rather gruesome.  Enjoy another shot of the placid fields instead!

The Black Warrior River, which the city overlooked and which was its lifeblood, I’m sure. As I stood here I could almost imagine seeing hostile war-boats rounding the curve of the river.  Unlike the Alabama river, the Black Warrior River remains navigable to heavy industrial and commercial traffic. (The Alabama river is so constricted by dams and such that it’s mostly used for pleasure craft and fishing these days.)
Moundville is intriguing for its mysteries: why did people build it, remain a few hundred years, and then melt away into the forest? Cahokia had a similar fate.  There are just so many stories which have played out across familiar landscapes that have escaped the record completely. All we can do is stare, wonder, and probe the ground for answers.

Citizen, librarian, reader with a boundless wonder for the world and a curiosity about all the beings inside it.
View all posts by smellincoffee →
This entry was posted in Reviews and tagged Native America, TW on the road. Bookmark the permalink.