Posted on February 11, 2018 by smellincoffee

The Time Traveler’s Guide to Medieval England: A Handbook for Visitors to the Fourteenth Century
© 2008 Ian Mortimer
342 pages 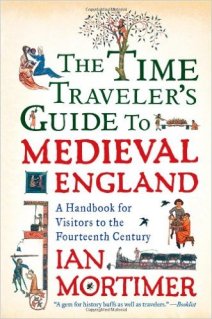 Within minutes of being transported to the time of King Arthur,  Mark Twain’s fictional Yankee found himself arrested and facing death.  If only he’d had a copy of Ian Mortimer’s Time Traveler’s Guide to Medieval England,  he could have avoided such peril.  Mortimer’s guide is a winsome social history of the 14th century,  which covers every thing from social structure to city smells to table manners. Herein we are told what to see, what to wear, where to eat, what to do (and more importantly, what not to do — like enjoying a bit of mutton on Fridays).  Now, it’s rather improbable that you or I or anyone else will ever actually have the chance to visit the 14th century, unless we’re doing it at the side of Geoffrey Chaucer in The Canterbury Tales.  But this book’s real service to the modern reader is to bring the past alive, to guide readers through a remembrance of old England– down its crowded, jostling, feces-strewn streets, through alleys of barking vendors, past parades of solemn clergymen, into hovels and palaces and across plains where knights joust and yeomen farm — to encounter the very real and varied stories which memory has forgotten or abused.  What a delight!

Ian Mortimer is an nigh-unparalleled host to the past, filling a wide table with a treasure of information. What aspect of life are you curious about from the medieval epoch? You will find it here. Clothing? You’re covered, literally, from head to foot, from young boys to old women. (Middle-aged men are not covered too well, wearing alarmingly short doublets that show off their expansive hosiery and ridiculously pointed shoes.)   Are you interested in justice, or the miscarriage thereof? Mortimer reviews the structure of law and order, from the neighborhood tithing-man up to the king’s courts.  Or perhaps you’d like to poke into medieval medicine? …well, you can, but you shouldn’t. It involves treatments of boiled puppies. One of the more interesting and unexpected chapters was on the medieval character.  Medieval men and women lived much more closer to death than we did, but this manifest itself in different ways: a macabre sense of humor, a love for fleeting beauty, and a ready tolerance of heads on pikes outside the public gates.  There are some curious omissions, like religion:   the Church’s social structure appears again and again, of course, from church courts to travelers’ inns runs by monks, and  the bits on custom can’t avoid religious discussion, whether we’re eating fish during Lent or  going to court because it’s always held on this-or-that holiday. The ways people worshiped, however, are not addressed.  Obviously Mortimer couldn’t cover everything, and so much is tackled that it’s a minor fault — but considering how strongly interconnected religion is with everything else, it’s a curious thing to not mention.

On the whole, I was enormously  pleased with this book.  Blame it on watching Men in Tights  as a lad or playing too much Age of Empires, but the medieval epoch is one that has fascinated me  for most of my life.  I used to have a dim view of it, but was cured by encountering Frances and Joseph Gies’ medieval history works, books like Life in a Medieval City and Cathedral, Forge, and Waterwheel.   The Gies and Mortimer’s works are obviously close kin, considering how much they intersect, but the Gies wrote several social histories of that sort and weren’t as pressed for space as Mortimer. He delivers an amazing amount of material in just a few hundred pages, but the strength of  this book is not merely its content. Mortimer brings alive the intimate human experiences of the medeval epoch — the despair of  parents losing their families during the Great Plague, the  passion and tenderness of poets and courtesans, and the inescapable sense of Belonging, as peoples’ social ties were everything. Mortimer is also upfront about his sources, whether they’re inklings from the Canterbury Tales, or art, or formal histories, court records, that sort of thing.

I look forward to reading the rest of the books in this series, possibly in April given the English connection.

Citizen, librarian, reader with a boundless wonder for the world and a curiosity about all the beings inside it.
View all posts by smellincoffee →
This entry was posted in history, Reviews and tagged Britain, history, Medieval, social history. Bookmark the permalink.

6 Responses to The Time Traveler’s Guide to Medieval England