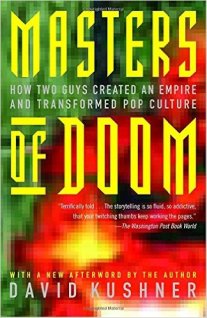 I wasn’t playing PC games  in the early nineties when Wolfenstein 3D, DOOM, and Quake revolutionized both the industry and the hobby, but  they were legends I never stopped hearing about after I subscribed to PC Gamer in 2000.  I was conscious of playing in their shadow:  one of my favorite games,  Star Trek Elite Force, used the Quake III engine.  When I learned that Wil Wheaton, a geek gamer’s gaming geek,  narrated an audiobook about  the formation of id software, I couldn’t pass it by.  Masters of Doom chronicles the coming-together of two programming geniuses – John Carmack and John Romero, their overnight transformation from pizza cooks into millionaires, and the pressures that broke their team apart.

This book’s main lure for me was the voice of Wil Wheaton, and I’m happy to say he delivered. Wheaton’s acting experience  serves him well here; his reading is flawless and even,   giving slightly difference voices to different people.   On several occasions he uses an accent, or gives a ‘dramatic reading’, as he does when he imitates one game developer announcing his game in the imitative style of Walter Winchell. The effect is utterly hilarious —  and ditto when he does a reading of Bill Clinton’s accusations against Doom in the wake of the Columbine bombing attempt.

I’d previously heard id described as innovative, but never appreciated how far back their innovations went. John Carmack, for instance, introduced side-scrolling to the PC at a time when it  was regarded as impossible given the hardware limitations of computers themselves. His test project inserted an id character, Commander Keene, into the first level of Mario.  Several other major breakthroughs are mentioned here; dynamic lighting, for instance, and tweaks that forced the Apple II to create colors  beyond its original pallet.   At this time, id was creating relatively innocent games like Commander Keene, which set a young boy against an alien invasion.  Elements that would become id hallmarks (the retention of slain enemies), were already present.  More importantly,  multiplayer itself was an id creation, at least as far as LAN connections went. The software that allowed multiple computers to dial a remote server – creating gamerooms to meet other gamers and play matches against them in – was created by a fan, but quickly purchased and integrated into the core gaming experience. From Doom and Quake came  gaming clans, still a staple of gaming competitions.

Throughout the book, id grows from two guys doing all of the work – designing, programming, art-crafting – into a team of men with different ideas and different directions. Although their success  — and their garages of Ferraris – had been made by working together, their wealth also enabled the two senior owners the resources to go their own way once their personal differences had become too much to bear. Carmack, for instance, is seen here as deeply serious coder who likes the challenge of it more than anything else.  Romero,  initially no less dedicated a programmer (and initially the engineering strength of the two-man team), later grew to relish the attention and moolah id’s success had given him.    The last quarter of the book details Romero’s departure from id,  the creation of his Ion Storm design firm, and the projects both men pursued throughout the 2000s. As of the book’s publication, and the audiobook’s presentation, both were still involved in gaming — Romero was then branching out into the un-exploited terrain of pocket pc/smartphone games, and  Carmack was still finishing Doom 3 despite nursing another hobby in rocketry.  (According to Wikipedia, he’s now involved in some VR project that Facebook bought out.)

Masters of Doom proved a fun bit of computer and gaming history, and my first look inside the gaming industry. My favorite designers are guys like Sid Meier (Civilization)  and Will Wright (SimCity /The Sims), both Carmack and Romero were fun guys to get to ‘know’ through these thirteen hours spent listening to Wil Wheaton.  There’s more than a little nostalgic appeal here,  too.

Citizen, librarian, reader with a boundless wonder for the world and a curiosity about all the beings inside it.
View all posts by smellincoffee →
This entry was posted in Reviews, Uncategorized and tagged arts-entertainment, audiobook, digital world, goods/services, history. Bookmark the permalink.

14 Responses to Masters of Doom