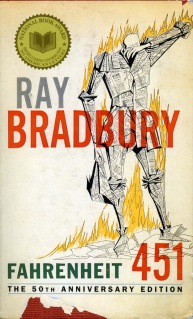 Like 1984, I suspect Fahrenheit 451 is famous enough that its basic details have seeped into the cultural consciousness of people who have never read it. Here we have a fireman whose job is to burn books, because so few people read them and the few that do are rendered unhappy by their contents. He’s fighting a losing battle, however, for despite the veneer of prosperity and the abundance of entertainment, the world the Fireman inhabits is a deeply unhappy one. Work is light, goods are cheap, travel is fast, and televisions can encompass entire rooms – but there is something wrong with a world where so many people try to commit suicide that stomach-pumping technicians are as routine as garbage collectors.

Our fireman, Guy Montag, is not like all the rest. While his wife buries her malaise by ensconcing herself inside her television stories, he finds the meaningless noise a distraction. The slight imperfection in his character that makes it impossible for him to simply sink into the soporific covers and ignore the sense of alienation widens into an outright fracture after he encounters two women with upraised heads. The first is a teenager reared without television, whose childhood curiosity has never been squelched, who looks to the heavens in wonder and asks the Fireman questions he has never heard before, or thought to ask. The second is an old woman who, threatened with the destruction of her house and books, takes the match from the firemen and sets the house and herself ablaze, staring in defiance all the while.

So the fireman  takes home a book, wondering — is there really something he’s missing?  But this isn’t the first time. It’s just the first time he’s admitted what he’s done to himself, the first time he’s dwelt on it enough to take out the other books he accidentally didn’t burn and then hid away – the first time he’s dared to read them, to confront what they have to say. His wife and coworkers can’t help but notice he’s not the same – and apparently unpracticed at guile, he’s terrible at it, sinking into bed with depression and quoting lines of poetry he could have only encountered through the forbidden fruit of books.

It’s when his boss arrives to put him back on the wide and winding that the book really reveals its substance. This is a book about the decline of literacy, yes. Books declined not because of a conspiracy but because people tended to gravitate toward easy entertainment, shorter synopses, that sort of thing. They failed to challenge themselves and became vapid creatures living for soma. But the book-burnings themselves were deliberate, created by a government that sought to minimize disruption and the loss of a happy-clappy world. Anything that could be offensive to anyone was purged. Anything that might start a mind to thinking about the world, to doubting, to unsettle everything was likewise burned. The chief’s case covers a couple of pages and is mesmerizing in its condemnation – not of his world, but of ours.  Our lives are saturated in sensation — news, politics, action-and-sex movies, dissent is filtered out through  our will and the design of search engines, and language and history are the stuff of clay, to be molded to fit the conceits of the day.

“Colored people don’t like Little Black Sambo. Burn it. White people don’t feel good about Uncle Tom’s Cabin. Burn it. Someone’s written a book on tobacco and cancer of the lungs? The cigarette people are weeping? Bum the book. Serenity, Montag. Peace, Montag. Take your fight outside. Better yet, into the incinerator. Funerals are unhappy and pagan? Eliminate them, too. Five minutes after a person is dead he’s on his way to the Big Flue, the Incinerators serviced by helicopters all over the country. Ten minutes after death a man’s a speck of black dust. Let’s not quibble over individuals with memoriams. Forget them. Burn them all, burn everything. Fire is bright and fire is clean.”

Bradbury!  thou shouldst be living at this hour:
America hath need of thee.

Related:
1984,  for the widespread anomie and the total loss of history and language.
Brave New World, Aldous Huxley

Citizen, librarian, reader with a boundless wonder for the world and a curiosity about all the beings inside it.
View all posts by smellincoffee →
This entry was posted in Reviews, science fiction and tagged dystopia, Ray Bradbury, science fiction. Bookmark the permalink.