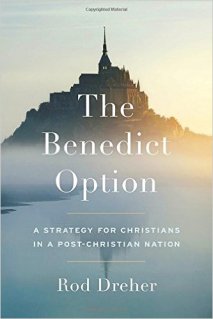 Christendom has fallen; long live Christendom.   In The Benedict Option, Rob Dreher argues that the Christian church in the United States is at a crisis point and must now think seriously and act deliberately if it is to avoid the fate of European Christianity. The vestiges of America’s Christian past have evaporated away,  and what has replaced them?  A vague feel-good sentiment that is applied like lipstick on the pig that is self-worship.  One of Dreher’s earlier books, Crunchy Conservatives, introduced readers to the idea of a conservative ‘counterculture’ to resist the worst aspects of American consumerism.  With the Benedict Option, Dreher maintain that such a counterculture is no longer an option: it is a necessity if Christianity in America is to survive a culture now defined by corrosive materialism, violent and pornographic entertainment, and the disintegration of the family.

Dreher begins with a visit to the cradle of western monasticism, the abbey of Nursia where St. Benedict began.  Benedict, too, lived in an age of decline – in the dusk of the western Roman empire, an age of corruption and decay. Born into privilege , he could have had a reasonably comfortable life, yet devoted himself instead to creating a monastery for the purposes of work and prayer.  Dreher uses the Benedictine rule – its  requirements for  being rooted in a place, living communally,  studying, praying, and physically laboring – to explore ways that people today are creating an authentic Christian counterculture; one which is vibrant  and self-contained, existing within but separately from the  mass culture. (Judaism is the stellar example, having sustained itself for thousands of years despite chronic marginalization and outright persecution –  and possibly because of that persecution, if Natan Sharansky’s case is typical:  his embrace of Judaism increased every time he was targeted because of it.)

Up until the present day,  Christians in America have been able to combine their loyalties;  America was a place formed by Christian ideals,   from the Puritan townships of New England to the Catholic parishes of Louisiana. For most of its history it has been populated almost wholly by Christians, resulting in a culture where even non-Christians tended to conform to Christian norms of behavior by default.  The American devotion to individualism was thus moderated by some sense of religions conviction  The zeitgeist  has changed, however, and the prevailing religious attitude of most Americans (including its Christians) is what Dreher and others call “moralistic therapeutic deism”. Its  tenets are all mild and comfortable: God exists  and wants you to be happy, you should be nice, and if you  die without having murdered someone, you’ll probably go to heaven because God is nice, too.  It is the kind of religiosity that lends itself well to a consumer culture:  the idea of God is there when you need it, a quick prayer during distress, but doesn’t intrude on one’s life otherwise.   But this sort of vague belief is the useless security blanket that the anti-religious hold all religions to be. It  does not form the character, or steel it for real crises;  it does not compel people to work to create things good and beautiful, let alone prompt them to sacrifice themselves for someone else’s good.   The American polity is likewise bereft of virtue: the national government is marked by routine assassination, excessive surveillance, and casual coercion of the powerless.   If serious Christians wish to  preserve their faith, they  must realize that they are Christians first and foremost..   “Our citizenship is in heaven,” wrote Paul, and centuries later St. Augustine would repeat that in his City of God.  To be born into America is an accident of geography; to preserve oneself as a Christian in a materialistic,  selfish, and scorning society will require grace,  sheer will, and the support of other Christians.

To live inspired by the Benedictines, to preserve a culture amid collective chaos,  suggests a degree of asceticism.  A certain level of withdrawal is required from outside society. By no means does Dreher advocate Christians withdrawing into survival cells in the mountains,  but he does urge readers to reflect on the degree to which their characters and minds are being fragmented and disordered by popular television,  too-frequent use of wireless devices, etc.  It also means rethinking engagement with State politics, for beyond a few critical areas there is not much that can be done. Protecting basic liberties is possible within the cultural mainstream, sure, but to be most effective,  Christians should focus on local politics. A Benedictine works the soil he is given; he does not attempt to be a one-man agricultural lobby.

Education is crucial for renewing Christian civilization, for state schools are where children’s souls go to die.   A child raised in a morally-inclined home will, at school, be exposed to children who were raised in sewers – children who believe that violence and verbal abuse are normal, and that watching naked ladies on their cellphones is harmless fun.  Dreher encourages Christians to consider  the growing movement of classical Christian education, which grounds the cultivation of children in a tradition with deep roots.  Homeschooling is another option,  though it requires immense patience and more sacrifice on the part of the parents.

What we must realize, says Dreher, is that the Christian way must become part of every aspect of life:  the home and Christian school should be ordered like a monastery, towards God.    At home, Dreher recommends regular family prayer regimens, and suggests that single people living alone might do well to look for fellow Christians to live with —  relying on them not just as roommates but as spiritual brothers-in-arms who provide sources of accountability and advice for one another, as well as  opportunities for helping one another in charity.   Fellowship is crucial:  the essential horror of the modern post-west is that people are so atomized and separated from one another.  The iPhone, promising connectivity to others but in reality allowing people to live more and more inside their heads, is a fitting icon of the age.    Not only does  Christian fellowship help people grow in their faith and flourish emotionally, but if the State becomes overtly hostile towards its new minority, Christians will need to rely on networks to find employment and resources. The time to build those networks is now.  Benedictine Christians can create a counter polis,  creating anew civic structures that will attract the materially and spiritually destitute.

While the Benedict Option addresses itself to the Christian future, I do not believe the advice is merely applicable towards surviving and thriving in the future. Even learning a little of the classical tradition is edifying and eye-opening, whether one is reading the moral philosophy of the Stoics or contemplating the beauteous order in medieval architecture.  There is no shortage of books written today about the effects of television and constant computer usage on the brain — I personally haven’t watched television since 2009,  after I realized it was addictive, distracting, and idiotic.    Much of the problem with American politics today is that the polis is gone:  we feel its absence, we desire its order and meaning, but the national State is too large, too distant, too complicated to be the polis. This is why Dreher advocated localist politics, but if we created in his words a counter polis,  a membership within society,  we would be aiding contemporary life immeasurably.   Not only materially, of course, but socially.  Membership is one of the most fundamental cravings of the human soul.   Christianity has always been a social religion, an other-oriented religion: it exists, G.K. Chesterton maintained, for the purpose of people who are not its members.  To create a vibrant, stable, and humane society within the absurd chaos of modernity would establish sanctuaries for those outside Christendom, who feel the alienation and look for answers.   Thus, the Benedict option is not simply one of self-survival, but one which serves as a witness and a stronghold of charity.

Citizen, librarian, reader with a boundless wonder for the world and a curiosity about all the beings inside it.
View all posts by smellincoffee →
This entry was posted in Reviews and tagged Catholicism, Christianity, localism, monastics, Orthodoxy, praxis, religion, Rod Dreher. Bookmark the permalink.

4 Responses to The Benedict Option