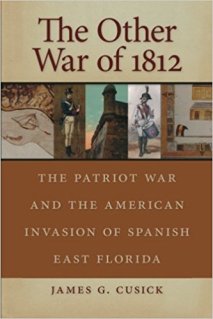 If the War of 1812 rings any bells for most Americans, they may associate it with the creation of the Star-Spangled Banner, the national anthem whose lyrics no one seems to know.  Those with a taste for history who look into it may regard it as the United States’ unfortunate ensnarement in the Napoleonic Wars,   responding to the attacks on its trade from  both English and French quarters. The invasion of Canada hints that the Americans were not quite perfect innocents, and still more persuasive is the case of the other invasion.  Far to the south, another war with ties to the War of 1812 had already been brewing, and would continue to work out bloody chaos for several years thereafter. I refer, of course, to the Georgian invasion of Florida.

Prior to its final annexation into the American union in 1821, Florida exchanged hands several times between the Spanish and English.  It was, in 1811, a strange sort of colony. Its residents were Spanish subjects, but most of the occupants and even leadership were not Spanish themselves.  Some called themselves Anglo-Spainards, for they hailed from varying parts of the British isles and yet gave Spain their allegiance while they lived in Florida.  Many were free blacks — some having escaped from Georgia, some manumitted under Spanish law for various reasons.  There were even Minorcans, previously brought in by the English to help rebuild Florida after so many Spanish residents left following the Seven Years War.    Spain, in 1811-1812, was in a bad way:   its king was lost to Napoleonic schemes, its legitimate regent besieged by the French at Cadiz.  Any moment all of Spain would be lost to Napoleon, and then where would little Florida be?

Georgians were asking the same question, but they knew the answer. Little Florida would cling to Great Britain’s skirts; they would allow British warships to steam from Floridian ports, there to play hell on American shipping. As war loomed with the English, the thought of the English navy safe at harbor so close to the American coastline was enough to raise anyone’s hackles. Spanish Florida was an enormous pain even in good years — not only did it continue importing new slaves from Africa, but it maintained itself as a safe haven for escaped slaves from Georgia. Worse yet,  these escapees were armed after joining the Florida militia.  And then there were the Indians, who were constantly used as a threat by Spain against the Georgians whenever border disputes loomed.  Getting the Spanish out of Florida would be useful all around.

In today’s America, Florida would have never stood a chance. In these early years of the Republic, however ,expansionism was still being reigned in by circumspection and the Constitution; as much as Madison might want to take Florida,   how could he declare war against Spain — the colonies’ first ally! — and shake them down? It was neither right nor lawful, and no one would let him get away with it.  Instead, Madison encouraged a certain revolutionary war colonel named Mathews to investigate the state of things in Florida,  and find people who wanted a little regime change. If they happened to raise the flag of revolution, kick the dons out of St. Augustine, and raise the American flag, well…then, by golly, who was Madison to stand in their way?

Of course, things didn’t quite work out that way. The Other War of 1812, heavy with details of diplomacy and brush combat, tells the story of how the revolution  died before it began, but was artificially resuscitated by a few hundred Georgians pretending to be Floridians with a hankering for Independence.  Because the ranking US Army officer in Georgia maintained that he could not invade Florida, only come to its defense after the local ‘authorities’ declared independence and requested aide,  the Patriots leading their war against the Spain had to make do on short rations. Their war was grim, ‘war even unto the knife’. Part of this was desperation, part of it the misery of battle conditions. (July is not fighting weather in the sunny South.)   The Georgians also had a serious grudge with St. Augustine and Fernandina, those cities who stole their trade and bid their slaves run, and they were especially vicious when fighting the Creeks, Seminoles, and free blacks of whom they lived in fear.    Eventually, the war petered out, but  the author points to the amount of destruction a few Patriots raised as one of Spain’s reasons for realizing Florida was a losing proposition.  The Americans were too close and too hungry to be held at bay long.

The Other War of 1812 is a good bit of history — substantial reading, yet accessible.   The war itself is not a riveting affair, just swamp raids, plantation burnings, and a prolonged siege of St. Augustine. There are a couple of stirring episodes  — a scouting party cut off for four weeks in hostile terrain, somehow holding its own despite being vastly outnumbered, for instance —  but the real star here is diplomacy. I don’t mean commissioners arguing with each other, but rather the light this sheds on how complicated relations were between the Americans, Spanish, English, and native crimes.  The author provides some books for further readings, as he links this Patriot war in with several of the Creek and Seminole uprisings that would erupt in the 18-teens.  I’m now itching curiously, but there’s so much ahead of Creek wars in my interest queue.

Citizen, librarian, reader with a boundless wonder for the world and a curiosity about all the beings inside it.
View all posts by smellincoffee →
This entry was posted in history, Reviews and tagged American Frontier, American South, Colonial America, Florida, history, military, Spain, War of 1812. Bookmark the permalink.