How to Run a Drug Cartel 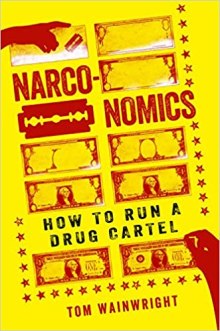 I only know of one rule for the drug business, and that via Scarface: never get high on your own supply.  And as Manny could tell you, the Ferengi rules of acquisition also apply, especially #113.  But drug markets often act like regular markets, albiet with distortions,  — and Tom Wainwright suggests that thinking about the economics of those markets can help us create more effective drug policies.  A fascinating look into the drugs trade, Narconomics offers a rare  perspective on a century of failed policies.

Basic economics primers tend to be huge,   and while the scope of this book is much narrower, there’s still a lot to take in.   In each chapter, Wainwright applies an area of traditional business evaluation (supply chains, human resources,  franchises) to the drug business.  We learn that drug cartels down south are much like Wal-Mart:  they don’t produce goods, they market and distribute them, and they have such a command of the market that they dictate prices.   Drug interests also mimic straight businesses in how they choose where to invest in their infrastructure (a failed state with easily-bribeable authorities is ideal),  how they’ve grown into general criminal enterprises that engage in human trafficking (both of immigrants and prostitutes),  and how they rely on brand names  to advertise.  Small-time gangsters might get permission to use a more established gang’s logos, for instance, provided they kick up money to the ‘franchise’.  Wainwright’s analysis extends to the drug market;  the flow of goods is not stopped by the drug war, only diverted. DC closed the Caribbean to trafficking?  The flow merely diverts through Mexico,  where it feeds gangs with easy access to American markets.  Online,  many of the problems of buying drugs (unpredictable prices and quality) disappear,  and the drug market acts like any healthy one:   consumers compare different products and prices, and sellers compete to deliver an enjoyable experience at the best price possible. (This according to Wainwright, anyway. I have no experience offline or online, my vices of choice being caffiene and hooch.)

At the end of each chapter, Wainwright uses his analysis to understand why a half-century of drugging on war  — I’m sorry, warring on drugs —   has proven so ineffective at curbing demand, and resulted only in failed states, profligate corruption, and insidious police militarization.  He points out, for instance, that since cartels can dictate prices, destroying marijuana fields doesn’t hurt them in the least: the farmers take the loss, because the cartel in each area will only buy at a previously-dictated price.  It would be more productive if states concentrated on preventing and rehabilitating users, Wainwright offers.  Ditto for sapping the cartels’ strength in members: throwing them in jail is counterproductive, but if cartel footmen were given vocational training, they would have options aside from the gang.

I wasn’t as interested in the advice as the look inside the narco machine, since I stopped expecting positive change out of government ages ago.   I was as captivated by this as I was reading about the number rackets of the Sicilian Mafia families when they were huge a century ago.   Definitely a memorable read, a look into an underground industry.

Citizen, librarian, reader with a boundless wonder for the world and a curiosity about all the beings inside it.
View all posts by smellincoffee →
This entry was posted in Reviews and tagged business, Central America, crime, drug war on America, gangs tribes and parties, goods/services, Mexico. Bookmark the permalink.

5 Responses to How to Run a Drug Cartel