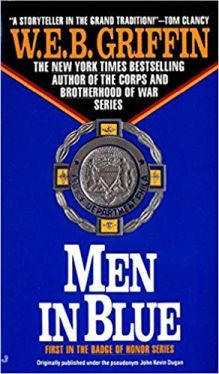 A buxom young reporter meets a fetching police captain at an out of the way diner, hoping for an illicit rendezvous. A half hour into their liaison,  the captain intervenes in an attempted holdup and is killed for his troubles.  Although the captain killed his assailant, her accomplice flees into the city and becomes the object of a manhunt.   Staff Inspector Peter Wohl is first to respond, and is asked by the higher-ups to Handle the Situation: obviously a married captain having an affair with a prominent news anchor is bound to be trouble.  So it is – at least for the anchor, the captain, and the anchor’s neighbor, who is found brutally murdered after the anchor’s role as a witness to the robbery-gone-wrong is exposed on TV.    Men in Blue  brings fascinating levels of detail, and some memorable characters,  to a cop drama that’s more dramatic in its focus on relationships than police investigation.

I’ve never read W.E.B. Griffin before, but he’s been compared favorably to Bernard Cornwell, a claim that bears investigating given my high regard for that spinner of action tales medieval and Napoleonic.   I can see some resemblance in the weight of details, as  Griffin here is happy to offer two pages of history on the rise of the .357 Magnum, and the creation of a certain forbidden cartridge that the deceased captain uses to defend himself.   Background information for both characters and important locales might take us back to when Herr Rickenbacher arrived in the United States from Bavaria.   Cornwell’s use of details is more overtly purposeful, though;   with Griffin, I’m not so sure.  It certainly adds to the novel –   believability and tension, for instance —  but can also be distracting when details are introduced and then never deliver to the plot.  Considering this is first in a series, however,  I don’t want to be quick to judge; the captain’s ammo may be exposed later on.

I can’t deny enjoying Men in Blue despite the odd fact that there’s not a great deal of police investigation going on;   the police officers readily identify the killed robber and her accomplice, and he’s not tracked down but spotted on the street and then chased.  The gruesome murder of the anchor’s friend and neighbor  does involve a little legwork, but it’s mostly happening in the background as the staff  inspector and the woman he’s protecting fall in lust with one another and disappear into bedrooms, to the confusion of everyone at the police roundhouse and the news station. It’s character drama that’s front and center here, from  tensions between the news people and the cops, the fights between cops and brass, and naturally the affairs between the anchor and her  courting LEOs.   It was fun, but I wouldn‘t put this in the technical thriller category of Michael Connelly,    I’ll need to read more of Griffin to see what kind of author he really is, though; this one’s brevity and role as the intro book to a series might be giving me a distorted impression.

Citizen, librarian, reader with a boundless wonder for the world and a curiosity about all the beings inside it.
View all posts by smellincoffee →
This entry was posted in Reviews and tagged police-detective stories, thriller, WEB Griffin. Bookmark the permalink.

2 Responses to Men in Blue