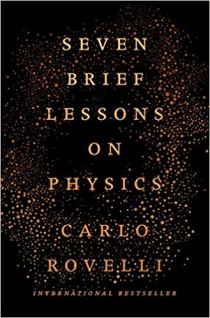 I recently finished Seven Brief Lessons on Physics, a slim little volume introducing readers to relativity (special and general), quantum mechanics, particle physics, heat, time, and our place in the universe.   As it’s less than a hundred pages I don’t know that I’ll give it full comments, but it is beautifully written, and offers powerful perspective (the kind Carl Sagan was good at delivering) along with some inkling into the basics of modern physics.    Below follow a few quotes:

“That is to say: space curves where there is matter. That is it. The equation fits into half a line, and there is nothing more. A vision — that space curves — became an equation. But within this equation there is a teeming universe.”

“Physics opens windows through which we see far into the distance. What we see does not cease to astonish us. “

“Within the immense ocean of galaxies and stars we are in a remote corner; amid the infinite arabesques of forms that constitute reality, we are merely a flourish among innumerably many such flourishes. “

“Our moral values, our emotions, our loves are no less real for being part of nature, for being shared with the animal world, or for being determined by the evolution that our species has undergone over millions of years. Rather, they are more valuable as a result of this: they are real. They are the complex reality of which we are made.  Our reality is  tears and laughter, gratitude and altruism, loyalty and betrayal, the past that haunts us and serenity. Our reality is made up of our societies, of the emotion inspired by music, of the rich intertwined networks of the common knowledge  that we have constructed together.”

Citizen, librarian, reader with a boundless wonder for the world and a curiosity about all the beings inside it.
View all posts by smellincoffee →
This entry was posted in quotations, Reviews, science and tagged Physics, quotations, science. Bookmark the permalink.

5 Responses to Perspective from Seven Brief Lessons on Physics