Needing a quick break from all the classics,  I read The Hacker Crackdown, a bit of cybersecurity history.  Sterling first delivers the background of the telecommunications system in the United States, specifically the expansive growth of AT&T and its recent dismemberment at the hands of  the courts system.  A near-total  network outage during a national holiday, while  entirely a spontaenous glitch based on weaknesses in AT&T’s software,    was blamed on outside intruders ; the government’s own increasing interest  in suppressing pirate BBSes distributing pilfered, sensitive, or suspicious materials (everything from emergency telecom protocols to bombs), coupled with AT&T’s need for a villain,  combined into a general campaign against “cyberpunks”.     Hacker Crackdown is a fun look back at ‘the internet prior to the World Wide Web. 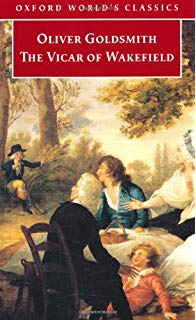 After play comes work, or rather something in the middle: The Vicar of Wakefield, originally scheduled for April,  was finally completed yesterday morning. I started on it last week but started slowing down as the silliness increased.  The March girls — Jo, Meg, Beth,  and Amy — introduced me to this book, which they thought was quite amusing.   Principally, it’s about the Job-like descent of a country vicar’s family into near-total ruin — and their rebound.   The vicar himself is a man of good intentions and principles, the latter of which are ignored when he gets distracted.    When the story opens, the vicar and his family are moving to a new position,   their fortune having been squandered by a poor investment.  Despite the vicar’s tendency to rattle off sermons and speeches on virtue, the family quickly ruins itself even more by trying to climb the social ladder, ignoring any sense of prudence: at one point,   someone’s been abducted, someone’s in jail, someone is lost on the continent, and the house is on fire.   There’s a lot of coincidences in the endgame, so much so that the Vicar comments on them, and in the end they muddle through to a happy ending — presumably a little wiser,  though human nature being what it is I doubt that wisdom will linger for very long.

Next up in the classics queue would be The Education of Henry Adams, though I also need to find time to tackle the first volume of Gibbon’s Decline and Fall of the Roman Empire if I’m to catch up fully before the year is out.  For the moment, I’m going to relax a bit with a couple of non-classics!

Citizen, librarian, reader with a boundless wonder for the world and a curiosity about all the beings inside it.
View all posts by smellincoffee →
This entry was posted in Reviews and tagged "classic", Cybersecurity, history, technology. Bookmark the permalink.