Posted on March 3, 2019 by smellincoffee 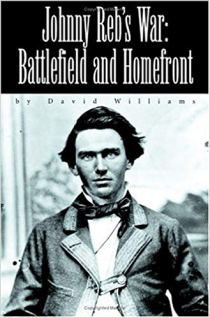 Johnny Reb’s War is a curious collection of two historical articles by David Williams, the contents of which were later encompassed by his impressively depressing People’s History of the American Civil War as well as Bitterly Divided: The South’s Inner Civil War. The two articles review the miserable conditions of the Confederate army (starving, barely clothed, and shoeless by 1862) on the eve of Antietam, as well as the prolonged plight of the southern poor in Georgia at home. The two intersect nicely, because the wretched conditions at the front, combined with the fact that their wives and children were starving, sick, and being plundered by their own government, led to crippling desertion; Jefferson Davis estimated in 1864 that as much as two thirds of the entire army had simply given up.

Those who have never explored this part of the Civil War before, of course, are in for surprises — they will learn, from a source who is by no means sympathetic to the southern cause, that most southern combatants were poor yeomen who rallied to the Confederate banner only when Lincoln announced an invasion; that the wealthy planters who voted for secession not only exempted themselves from fighting in the war, but drastically weakened the army by focusing on cash crops they could only sell to the ‘enemy’, rather than food to supply their countrymen; and that the Confederate government bankrupted its moral support fairly quickly by imposing subscription, suspending habeaus corpus, and not checking corruption.

Williams provides a long train of stories and scathing comments pulled from contemporary newspapers and letters, but — as with Williams’ previous works — I find myself wishing I could find similar information from different sources to get better perspective.  However, this was absolutely worth reading just for the  excuses southern soldiers would render to their superiors for killing livestock in Maryland. One insisted he’d been attacked by the pig and had been obliged to kill the porker in self-defense;  another claimed he’d felt sorry for all the dislocated animals after the battle and decided to put them out of their misery.   A related chuckle came from the report of a Confederate officer who detailed how Lee ordered a man executed for stealing a civilian hog; Stonewall Jackson left the execution to fate by putting the man into the frontlines. When the man survived Antietam, the recording officer noted that the accused had lost his pig, but saved his bacon.

Citizen, librarian, reader with a boundless wonder for the world and a curiosity about all the beings inside it.
View all posts by smellincoffee →
This entry was posted in history, Reviews and tagged American Civil War, American South, history. Bookmark the permalink.