Of Caesar, Aeneas, and Selma

Posted on March 2, 2019 by smellincoffee

This past week I’ve been dogsitting in the country, and if you’ve never enjoyed a rural sunset with a glass of wine and Chloe Feoranzo playing in the background, it’s an experience I can recommend. While I was away, February ended, and I realized I hadn’t commented on either of my classics club readings for the month…mostly because I couldn’t think of that much to say about them, really.  I’d already read the ‘story’ of the Aeneid last year or so, and had been watching videos on it in preparation, and by the time I experienced story in verse I was tired of it.   Of The Conquest of Gaul…well, it’s exactly as it says it is, a military history of the invasion of “Gaul”, which here means western Europe and a weekend in Britain, with some sociological sketching on the Gauls and Germans by Caesar.  I found that more interesting than the military business, frankly, especially the fact that the German tribes  viewed agriculture with suspicion and frequently uprooted their own people who settled, lest they grow soft and corrupt. 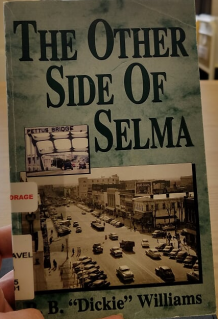 More pleasantly, I re-read a book I stumbled upon ages ago, called The Other Side of Selma.  Though I grew  up here,  I never experienced Selma as a town and place until after college. Before then, I only traveled the commercial sprawl north of the city,  and entered the ‘real’ city only when I needed to visit the library.  The Other Side of Selma introduced me to it as a beloved city, however — a place where people lived and loved, not merely a place for politicians to visit prior to elections and make speeches at. Its author, Dickie Williams, grew up in Harper Lee’s hometown of Monroeville, but often traveled north to Selma for supplies. When he came of age, he began working at Swift’s drug store on Broad Street,, and there began to collect stories he’d heard — mostly funny,   like of a barber in the Hotel Albert who used to entertain people with sayings and tales from the old country of Russia, only to later be exposed by an actual Russian who visited the city and declared the barber’s “Russian” to be  farcical gibberish.  Others are personal, like Williams’ account of being asked by a woman in town how these diaphragms for women were inserted and used.  (This was in the fifties, so young Dickie was highly embarrassed to say the least.)    When I first read this, it made Selma come alive for me in a way it never had been: for the first time, I could imagine the Hotel Albert as a place that people went in and out of, where there were businesses and life, instead of  it being just the name of a building what once was and now isn’t.  I don’t know if that makes any sense, but my interest in re-experiencing that initial joy drove me to find one of two university libraries in the state that have a copy of this book so I could sit and read it. Unexpectedly, it seemed to have more hunting stories than anything else!     Interesting how we can latch on to one aspect of a book and so exaggerate it in our memories.

Citizen, librarian, reader with a boundless wonder for the world and a curiosity about all the beings inside it.
View all posts by smellincoffee →
This entry was posted in Reviews and tagged "classic", Alabama, history, Rome, Selma. Bookmark the permalink.

2 Responses to Of Caesar, Aeneas, and Selma