The Ends of the World

The Ends of the World: Volcanic Apocalypses, Lethal Oceans, and Our Quest to Understand Earth’s Past Mass Extinctions
© 2017 Peter Brannen
336 pages 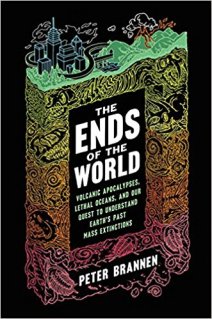 Earth has tried to kill us five times before, and now it’s at it again. (To be fair, we’re kind of egging it on.)   The Ends of the World is a long natural history of life on Earth which examines five mass extinctions, period in which the majority of life was destroyed. Each time it rebounded as the Earth itself continued to grow, supercontinents forming and breaking up, the air and oceans altering in their chemistry. Although direct causes of species-death vary by incident,   and are sometimes so numerous that it’s rather like the murder suspects on Agatha  Christie’s Orient Express,   climate is a crucial factor in each one. Specifically, author argues that as carbon dioxide goes, so goes the planet.

We live in a moment in time — a period when the Earth is rather comfortable for our species and those we rely on.  That wasn’t the case for most of Earth’s history; oxygen took at least a billion years to arrive, and land-based plants themselves are relatively recent arrivals, appearing 700 million years ago at the earliest.  Even once Earth began to look familiar —  familiar continents, trees,  rabbits, etc — it wasn’t settled    There are geological cycles  — shifts between glacial and tropical epochs, for for instance — at work.   Other cycles involve carbon as it travels between land, sea, and air, and this is a cycle that can play hell with life if it gets out of kilter and…oh, turns the Earth into a hothouse, or acidifies the ocean and kills everything there.  And then there’s vulcanism — not only do mass eruptions offload unwieldy tons of CO2 at once, but sometimes they cover areas the size of the United States or Russia in  two mile-deep tide of lava.   Even a prepper with a bulging bug-out bag and a remote hideout would be hard pressed to come back from that.

Geological forces are usually slow and ponderous — glacial.  But slow forces building up can reach a threshold where everything goes sideways all at once, a catastrophic quantum leap. Think of an earthquake, and the slow-but-accumulating stresses that build up between tectonic plates until they finally slip and a city is reduced to rubble in seconds. Brannen believes this happens with atmospheric and oceanic chemistry, too.   Even when the cause of an extinction seems outside, unavoidable, and sudden — like the asteroid impact that has the primary credit for killing the dinosaurs,  the climate can’t be ignored. The chapter on the K-T extinction argues that the asteroid collision wasn’t responsible for the mass extinction on its own: while it would have  done an enormous amount of local damage,  its real contribution was to cause so much tectonic distress that mass volcanic eruptions and outgassing crippled the atmosphere.

If you have anticipated that the book ends with a few pointed remarks about global warming and the present state of the carbon cycle, well — you’re on the mark. Brannen dedicates the last section of the book debating the ‘sixth extinction’, and humanity’s role in clearing the earth of megafauna and challenging the old super-volcanoes in terms of how much gas can be pumped into the atmosphere.   The debate covered shies away from putting the human-induced extinctions of many species into the category of these documented five.  The five are judged to have been global events, near-complete ecosystem collapses: the only survivors were in weird niches, ecological islands. (Or perhaps on literal islands.) While humans have deliberately killed many species and accidentally obliterated more, we’ve also repopulated the Earth with species under our control: cattle, oxen, sheep,  the like.  Ecosystems have been formed and sometimes destroyed, but we’re not facing  imminent and global collapse.    Even so ,the  author argues, the role of the carbon cycle in previous mass extinctions should be foremost in our mind, because it’s not just a matter of rising seas.  Ocean acidification from CO2 absorption  is the “other” carbon problem, compromising as it does submarine ecosystems like those centered on coral reefs. (This “other” problem comes up a few times in another science/nature book I’m reading, Lost Antarctica.)

Although it’s a little odd to describe a book recording the near-total loss of life on Earth not one but five times as ‘fun’,, Ends of the World kind of is,  a morbid Planet Earth.  I particularly appreciated being able to sit in on debates in the last two chapters, as Brennan interviews various scientists who are contending (politely) with one another for the most accurate and factually-supported theory..  Ends of the World may expose many readers to the carbon cycle, something I’ve heard little about,  and there’s nothing quite like mile-deep sheets of lava rolling over continents to pique the imagination!

Citizen, librarian, reader with a boundless wonder for the world and a curiosity about all the beings inside it.
View all posts by smellincoffee →
This entry was posted in Reviews, science and tagged climate change, geology, natural history, science. Bookmark the permalink.

7 Responses to The Ends of the World