She Can’t Say No to a Soldier

A few months back I posted a collection of oddities from my hometown newspaper throughout the 20th century,  mostly to illustrate how local papers have radically changed in their offerings. From time to time I see little curiosities I like to share — usually just via email.  I’ve been saving a few with an idea of making a “Yesterday’s News” feature here, with funny or intriguing pieces of old papers offered. Today I spotted something in that vein that reminded me of an old song…

From the July 16, 1941 edition of the Selma-Times Journal. The caption reads: “Barbara Dillon has yen for men in uniform, and is dating draftees these days. She’s  member of Atlanta’s ‘I Want to be Drafted’ club, girls’ group providing dates exclusively for service men.’
What comes to mind is Joan Merril’s  WW2-era “You Can’t Say No to a Soldier“:

“You can’t say no to a soldier, a sailor, or a handsome marine
You can’t say no if he wants to dance —
if he’s gonna fight, he’s got a right to romance
Get out your lipstick and powder
Be beautiful and dutiful, too
If he’s not your type, then it’s still OK
You can always kiss him in a sisterly way..”

That last line always amuses me. But, there are dissenting views about saying no to those boys in uniform! From the same paper, a few weeks later: 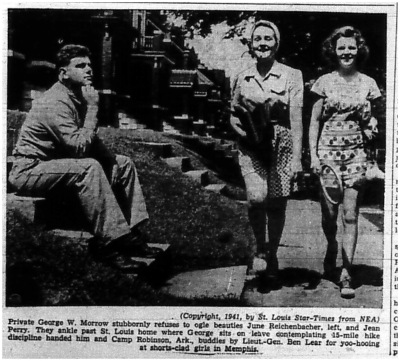 Citizen, librarian, reader with a boundless wonder for the world and a curiosity about all the beings inside it.
View all posts by smellincoffee →
This entry was posted in Reviews and tagged Yesterday's News. Bookmark the permalink.

2 Responses to She Can’t Say No to a Soldier