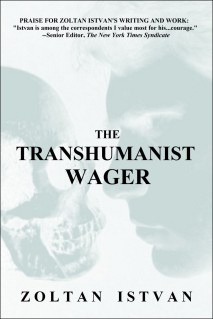 Imagine a protagonist who made Howard Roark seem like a warm and cuddly pushover. That’s Jethro Knights, a red-bearded, icy-blue eyed Ubermensch who is determined to live forever — and if anyone gets in the way, he won’t hesitate to terminate them.  Dedicated to transcending biological limits, Knights’ five-year plan — funded by a Russian gangster/oil  mogul — involves building a floating city and taking over the world.  Those who are useful will be invited to join the quest; those who are not useful will die. “That’s evil!”, you say?  Only if you subscribe to  ‘baggage culture’ —   Knights’ ideal ‘omnipotender’ recognizes no limits to his will, and those who do are mere sheep who deserve to be slaughtered.  Did I mention he’s the good guy?

I stumbled upon this novel while trying to find a story about transhumanist themes. While I’m not a transhumanist myself — that is, someone who believes in integrating technology into the human body to make ourselves super-machines,  with the possibility of immortality —  I have an academic interest in what other people will be doing to themselves as the 21st century continues to metastasize.  Unfortunately, this novel does not provide much in that vein besides robots and magic pills that cure cancer. The bulk of the novel is instead arguments in favor of Knights’ philosophy, integrating the technological aspirations of technohumanism with egoism.    Those who have read The Fountainhead will instantly spot the transparent borrowing of structure: we have a red-headed superman who argues  for the worship of Self, and advocates for its conquest of anything inferior;  he is opposed by a sniffing weasel who does whatever he is told by the third bad guy,  an insincere humanitarian whose public passion for helping the poor is really a platform to make him powerful.  Knights’ also has an ally in an exotically beautiful woman who shares his philosophy in part, but not in full, and thereby challenges him as an intellectual sparing partner. If that weren’t enough, Knights is put on trial and defends himself in lieu of a lawyer, spends much of the book speechifying, and will eventually create a Galt’s Gulch-like sanctuary for his fellow Ubermenschen to devote themselves to science and global conquest. (That’s more Atlas Shrugged than Fountainhead, however.)

To be fair, this borrowing of structure, characters, and plot developments could be seen as an homage to Ayn Rand, just as his Three Laws of Transhumanism are a patent borrowing of Asimov’s laws of robotics.  I think, however, if Rand were to read it she might be inclined to shove the author off of a Roark skyscraper. Her characters could be cold, but they were consistent;  Knights alternates between demanding the government leave him alone and declaring that Transhumanism should be supported by the government — between writing philosophical treatises about the supremacy of the Self, declaring each person to be a sovereign god, and then raging because our ‘dear world’ is being held back back by naughty governments . Look,  Jethro, you can’t throw off the shackles of morality in one sentence, and then  condemn governments on moral grounds in another — and  you can’t claim to care about people when you openly champion killing those off who are not “useful”.   This inconsistency is rife in the book. Towards the end, in a speech that goes on for scores of pages,   Jethro promises to to each person of the world a college education. If you haven’t read classical literature, can’t recognize great pieces of music, and can’t do physics in your head, you will go back to school, says he.  While this is wildly impractical on its own, it’s hilarious considering Jethro has spent the entire book raging against culture, history, religion, etc — against anything that is not related to the technological conquest of sickness, death, and the world.   Jethro hates ideas like honor, hates familial bonds, hates religion, hates political debate:  why would he want to read something like The Illiad?   I’m not exaggerating his contempt: if ranting about them throughout the book wasn’t enough, as the plot reaches its climax he systematically destroys every religious and political building on the planet — and as the artistic legacy of thousands of years goes up in flames, he shrugs. “I told you. I’m a futurist, not a historian.”

The Transhumanist Wager is easily one of the least humane books I’ve ever read. Frankly, I’d have to read Mein Kampf to give it competition.  The two books have one great similarity: they’re badly written.  Throughout the book, as I encountered weird errors, I tried to forgive them on the basis of the author being  a non-native English speaker. But they pile up — the odd use of “ethnic” for “ethical”,  the spelling of Aryan as Arian (“Arian looks”), the confusion of Mobile, Al and New Orleans;  weird dialogue that has a Chinese diplomat referring to the Ubermensch as “wizard of spells”, and so on.  I began the book to see what ideas for cybernetics might be in it, but continued out of morbid fascination.  Suffice it to say, if this book’s philosophy is the attitude that prevails in the 21st century, our best hope is a coronal mass ejection.

And now, as an antidote, a verse from Walter Scott:

Breathes there the man, with soul so dead,
Who never to himself hath said,
This is my own, my native land!
Whose heart hath ne’er within him burn’d,
As home his footsteps he hath turn’d,
From wandering on a foreign strand!
If such there breathe, go, mark him well;
For him no Minstrel raptures swell;
High though his titles, proud his name,
Boundless his wealth as wish can claim;
Despite those titles, power, and pelf,
The wretch, concentred all in self,
Living, shall forfeit fair renown,
And, doubly dying, shall go down
To the vile dust, from whence he sprung,
Unwept, unhonour’d, and unsung.

Citizen, librarian, reader with a boundless wonder for the world and a curiosity about all the beings inside it.
View all posts by smellincoffee →
This entry was posted in Reviews, Uncategorized and tagged science fiction, transhuman. Bookmark the permalink.

7 Responses to The Transhumanist Wager