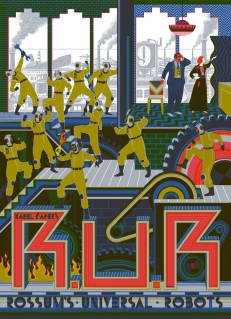 ALQUIST: . Has Nana got a prayer book?
HELENA Yes, a big thick one.
ALQUIST And has it got prayers for various occasions? Against thunderstorms? Against illness?
HELENA Against temptations, against floods!––
ALQUIST But not against progress?
HELENA I don’t think so.
ALQUIST That’s a pity.

Introducing….the robots! Literally.  This 1920 play  by Karel Capek  introduced the term into English, in a story about manufactured people who revolt against their masters. The play opens with the arrival of the President’s daughter to a remote island, the manufacturing base and headquarters of Rossum’s Universal Robots. These robots are not mechanical mock-ups of human beings, but rather living creatures  whose tissue is chemically manufactured. The creatures themselves are ‘simplified’, their insides rearranged or reduced for maximum efficiency, and all of the messy human stuff — pleasure,  ambition, et — taken out. All that remains is a super-strong body with an obsessive interest in work — at least, at first.   What began as an experiment from a pair of mad scientists is completely taking over the global workforce, reducing the price of goods to pennies. The dream of the RUR industrialist, “Domin”, is to liberate mankind from slavery to itself.   He dreams of a future where humans spend their days painting and playing the lyre or lolling about in the sun, while all of their needs are taken care of by robots.  Of course, there will be some unpleasantness first. What he doesn’t reckon with is that his own engineers’ own curiosity will mean not just unpleasantness, but the extinction of both humans and robots.

“R.U.R”. may seem like a period piece given its steamboats, steam locomotives, and telegraphs, but those are mere props.  The story irself — the slow death of humanity via dependence on robots —  is one we are perfectly capable of seeing come to fruition.  We won’t be executed by brigades of rifle-toting androids, no, but RUR demonstrates another kind of death.  The play takes place over a decade, in which robots take over so much labor and service that humans stop living. They exist, but they’re no longer working, no longer struggling for the future; most people do not even have children. Even war has become a robotic domain, as armies of drones are used to invade countries and butcher people (once it’s destroyed the opposing army of drones, of course).   Consider our own lives; every passing year brings more automation, and those who live beyond just the moment may wonder what will be the result. How  will governments cope with rising unemployment — and will we reach a point where the majority of people have nothing to do? And even if people’s material needs are met (in a Player Piano scenario, with sustaining welfare for the unemployed masses), how  will society absorb their energy, their itching will to be doing SOMETHING? Regardless of the hopes of optimists, not everyone wants to spend their time reading and painting and playing the lyre. Some people want to build, to compete, to do something mighty….but what will be left?

Though a short read, RUR remains thought provoking close to a century after its publication.

Citizen, librarian, reader with a boundless wonder for the world and a curiosity about all the beings inside it.
View all posts by smellincoffee →
This entry was posted in Reviews, Uncategorized and tagged robots, science fiction, the play is the thing, vintage SF. Bookmark the permalink.