Posted on December 4, 2016 by smellincoffee 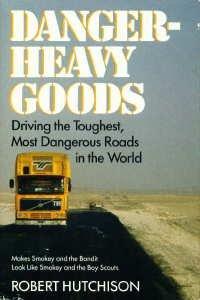 When is a lorry not a lorry? When it’s leaving the country, according to the British drivers here. A continental trip makes a lorry a bonafide truck, and the run covered here puts even American transcontinental trips to shame. In Danger: Heavy Goods,  Robert Author recalls a run from England to Saudi Arabia he participated in in the early 1980s, at a time when Arabian ports were so overcrowded that ships sat at sea for weeks waiting for their turn to unload.  He takes readers through a string of countries which no longer exist, across the Bosporus Bridge, and down to Ar’ar by way of  Iraq — which is invading Iran. Well, golly.

Where to start with this book?  It is a snapshot of Europe in the early 1980s, where Yugoslavia, Czechoslovakia, and the DDR were still destinations and  Gorbachev is trying to reform the Soviet Union by banning alcohol. It is a road trip of epic proportions and epic aggravation. Time and again the drivers that Hutchinson partnered predict that the middle east run is doomed. The pre-EU customs inspections of Europe — the frequent scrutiny of their records, the endless paperwork — was bad enough, but the middle east is a bonafide nightmare. From Turkey to Saudi Arabia, every official from customs agents to parking attendants wants their cut,  a little bit to grease the palm The preferred bribe is cigarettes, and every country has its most-favored denomination: Turkey is Marlboro country,  Syria swears by Gitanes, and Rothmans rule in Saudi Arabia.   Bureaucratic delays are endless, some of them lasting as long as a week, and once the cigarettes are exhausted anything else is up for grabs. English newspapers, catalogs, canned food?  The amount of aggravation drivers throughout Eurasia receive at the hands of customs officials in Iraq and Saudi Arabia  amaze the author: it’s like they don’t want goods.

If one can get by the customs agents without being arrested for mysterious circumstances, there’s still everything else to contend with. Take your pick — roads that turn into bobsled runs as soon as they’re wet,  or threaten to throw trucks into rig-destroying quagmire if they stray from the beaten path. And which is more dangerous, Turkish prostitutes or the fact that Iran and Iraq are bombing one another? Tough call.  There are plenty of surprises which far friendlier, though. Although drivers on the mid-east run are technically in competition with one another, there’s a mild level of camaraderie in the face of a common enemy, customs. In one chapter, the British drivers warn a drunken Turk of a heavy police presence despite Turks being the main rival of British firms for transeuropean traffic. (They warn him in German, while in Czechoslovakia.  German is also used as a go-between language in Ar’ar,  Saudi Arabia.)

Danger is a most interesting ‘memoir’, delivered by a guide who has an honest interest in every country he visits, frequently regaling readers with historical background on the places he and his coworkers are passing through in their two trucks.  Virtually every aspect of the run has been overtaken by history, though. I haven’t been able to find any stats on truck traffic to Saudi Arabia from western Europe, but with a few decades of oil money sunk into the ports I doubt it’s as thick as it was when featured here

Related:
Truck this For a Living: Tales of a UK Lorry Driver, Gary Mottram

Citizen, librarian, reader with a boundless wonder for the world and a curiosity about all the beings inside it.
View all posts by smellincoffee →
This entry was posted in Reviews, Uncategorized and tagged Britain, Eastern Europe, memoir, Middle East, on the job, trade, transportation, Turkey. Bookmark the permalink.