Posted on December 7, 2016 by smellincoffee 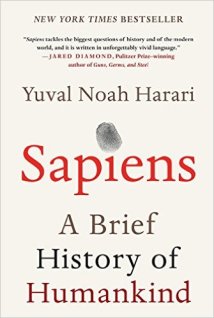 In Sapiens, Yuval Harari presents a natural history of the human race from its flowering across Eurasia to a worried reflection on the prospects of of technohumanism. The book’s ambition is enormous, its execution simultaneously intriguing and annoying.  Its broad strokes are fascinating; the author distills all of human history into a series of ‘revolutions’ and draws lessons from each. The details between all those strokes are the bothersome bit.  Harari begins with the Cognitive revolution, which is still mysterious but resulted in humans developing language and telling stories. He moves then to the Agricultural revolution, and then to the Scientific.   In the 21st century, we stand on the precipice of another — one that may destroy us, either by physical force or by eroding every conception of what it means to be human.

After an opening chapter of strictly-factual anthropology, Harari shifts into broad-strokes historic commentary. He introduces the agricultural revolution as the worst deal man ever struck, trading as we did an active, independent lifestyle for sedentary control — gaining the ability to sustain larger populations, but at the cost of health, happiness, and freedom. Agriculture gave rise to empires, which he does not scorn but views with marginal favor, seeing them as powerful forces that keep the peace and bring people together under common law and trade networks. A keystone of Harari’s perception of mankind is that we are a mythic species, a story-telling species. The much-abused word myth is not a synonym for falsehood, but rather a story of meaning — one which binds the people who tell it together, imparting a common understanding of the world.  The Declaration of Independence, for instance, constitutes a myth; not because it is a falsehood, but because the American “story”,  the tale of colonists standing up for themselves and throwing off the yoke of arbitrary authority in the name of natural rights, is one that forms the basis of American identity, even after the Constitution which followed it is nothing but dirt caked inside the imperial boot.

More to the point, though, Harari asserts that natural rights, law, money, and other core concepts are likewise usual fictions with no material existence. So long as we all believe in them, acting as though they are real, they serve us well. Religions are the ultimate expression of this mythic power — often being not merely an ideology, but an entire corpus of ideas and institutions that bind every part of human life together in the same story.  Interestingly, Harari uses a definition for religion — a system of values and norms based on superhuman order —  which is broad enough to include liberalism, communism, capitalism, nationalism and Nazism.   No doubt that tweaks a few noses.   Those ideologies’ connection with the idea of mythos is certainly worth exploring in depth, if only so people realize that the power of ideas has a deeper source than we realize — and care should be exercised.  The examples he uses are a mixed bag; some have obvious religious connections (classic liberalism has the underlying assumption of natural rights; communism has the historic dialectic), while others are more of a stretch, in part because definitions are up in the air.  He references capitalism, for instance, but with no definition  —  is he referring merely to the private ownership of goods,  or to belief in Adam Smith’s invisible hand?

Harari manages to combine constant dismay at what humans have done to the world with an apparent hope that we’ll keep doing more of it. That is, he’s seemingly optimistic that economic globalization will create a world-empire that will do for the globe that Rome did for Europe, but constantly bewails  the effect we have on the world, chronicling extinctions and such. We have little positive to show for our time on Earth, he concludes miserably, and expects still worse from the future as we begin doping ourselves with soma to hide from the misery of existence.

Although I found a few ideas here very intriguing on the whole I was not particularly impressed. Let’s take extinctions, for instance: he blames every extinction since the dinosaurs at the hand of man, but doesn’t connect these to other parts of his own narrative — for example , what if people began farming because they had few other choices,   competition having exhausted hunting and foraging opportunities?  The natural world is not some garden, a static thing to  be taken care of; it teems with life and death.  Harari speaks with absolute confidence on a great many subjects, crossing disciplines as deep and broad as the Pacific in the same breath.  I can only think of Will and Ariel Durant, who — after fourteen thousand pages dwelling on human history, religion, music,  and philosophy — wrote only in humble awareness of how little they knew.  Sapiens is replete with confidently announced facts with no footnote as reference — and no reference in reality, sometimes. To use one particularly pungent example: Harari asserts that in 1860, a majority of Americans agreed that enslaved blacks were persons who should be citizens, and that a bloody civil war was required to get the South to agree.  That laughably bad reference to the Civil War is not merely inaccurate in its simplistic nature: it is inaccurate in every respect.  When did they have this national argument about slaves and citizens? Surely Harari isn’t referencing the 1860 election, in which Lincoln  — the inspiration for South Carolina’s secession —  maintained he had no interest whatsoever in  forcefully eliminating slavery where it existed.  The extension of the franchise came later, as a part of Reconstruction in an effort to keep the old elite from voting itself back into power.

The most interesting aspect of Sapiens for me is Harari’s emphasis on man as a creature who lives in myths, but that discussion needed more nuance. To refer to everything not material as fictitious is absurd: one might as well say that society doesn’t exist, because it’s a relationship between people and not a tangible thing in itself.  The relationship exists in our minds, as memories — it is not mere fiction. Harari recognizes the importance of our mental reality, I think, but his language intimates that we’re all living in agreed-upon lies — a spectre no less dispiriting than his fearful forecast,  a world wherein people no longer resist death and discouragement by creating beautiful things together, but instead dope themselves with soma and drowsily acquiesce.

In short,  Sapiens has moments of interest as a polemic; in terms of historical substance, it is far more superficial than Guns, Germs, and Steels to which it is often compared.

Citizen, librarian, reader with a boundless wonder for the world and a curiosity about all the beings inside it.
View all posts by smellincoffee →
This entry was posted in history, Reviews, science and tagged anthropology, history, science. Bookmark the permalink.