Posted on September 9, 2016 by smellincoffee

Last year I was tasked with the lamentable duty of weeding our history, literature, and science sections, and so in consequence spent several weeks methodically going through the stacks, book by book, making several discoveries. One,  in regards to literature, evidently my city became CouchPotato-ville in the 1970s. I found book after book which had enjoyed steady attention from the 1930s to the  1960s, but once the 1970s hit — nothing. A precipitous drop off. I suppose everyone started watching Family Feud.  I also encountered a great many books I’d never seen before, like CS Lewis: Images of his World. As the title suggests, it is a photographic treatment of Lewis’ life, illustrating the towns, universities, and pubs wherein he lived, along with some biographical exposition as  extended captions.

Personalities central to Lewis’ life appear here, like his wife Joy, his stepsons, and of course his numerous colleague and fellow writers, namely Tolkien. There are also unexpected supporting characters like his long-term gardener. The latter inspired a character in The Silver Chair, and the book smartly combines letters or biographical narration about Lewis’ life with photographs. A photograph of several young Cambridge students cycling down High Street is the backdrop for a letter in which Lewis details an early social outing, getting together for ‘brekker’ before pedaling off through town. Similarly, his recollection of the many ferry trips from Ireland to boarding schools in England is accompanied by a large photograph of two boys crossing the same ferry, looking at the approaching coast in anticipation.  These shots of others, while illustrating Lewis’ life, don’t appear staged;  there’s at least one fellow on a bicycle who didn’t look pleased at all to find a camera aiming in his general direction, though the intended subject was the street.  There are also photographs of Lewis’ earliest creativity, of his schoolboy notebooks filled with the history of “Animal-Land”, accompanied by little drawings. I’ve been meaning to enjoy this book in full for a few months now, as  I often glance inside it while shelving just to savor the photographs of Cambridge, Oxford, and the Irish countryside. Many of the photographs are only greyscale, but even so they’re delightful. As someone who has read and enjoyed thoroughly his autobiography, I am grateful to have discovered this piece. 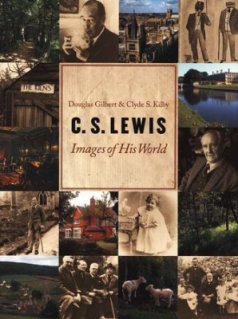 Citizen, librarian, reader with a boundless wonder for the world and a curiosity about all the beings inside it.
View all posts by smellincoffee →
This entry was posted in Reviews, Uncategorized and tagged biography, C.S.Lewis, CS Lewis. Bookmark the permalink.