How the Scots Invented the Modern World

Posted on September 10, 2016 by smellincoffee

How the Scots Invented the Modern World:The True Story of How Western Europe’s Poorest Nation Created Our World and Everything in It
© 2001  Arthur Herman
400 pages 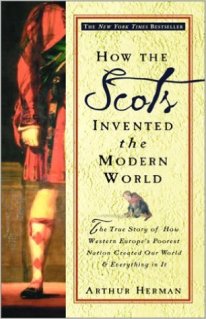 An elderly patron at the library has adopted me as his go-to source for history books. These days he merely arrives at my desk and announces, “You know what I like. Let’s find something!”. As a reward for my literary services, he decided to lend me one of his books, How the Scots Invented the Modern World.   As it happens, I know very little about Scottish history, except in connection with English and American history — so I dived in, and found it a most interesting book.  At its best, it’s a history and reflection on the Scottish enlightenment, sweeping enough to bring to mind Will Durant’s approach for history.  The author addresses — for starters — religion, philosophy, architecture, politics, economics, and literature. At a middling level, it’s social history of a sort, recounting the Scottish experience in America in a manner very much like previous books I’ve read on the Scots-Irish.  At its most trivial, it is merely a narrative recollection of this Scotsman inventing this and that Scotsman inventing that, and oh, by the way, that fellow invented steamboats in America, and he was born in Scotland.   Fortunately, How the Scots Invented the Modern World is only trivial toward the end.

The bulk of the book is taken up with Scotland’s intellectual and economic development as a developed and ‘enlightened’ nation, though the author favors those who celebrated Scotland’s romanticized wildness, like Sir Walter Scott.   Some very familiar names, like David Hume and Adam Smith appear here, along with names wholly new to me, like Francis Hutcheson.  These figures do not appear sans context; instead, their arguments are rooted in Scotland’s political history, from the various revolts against Anglicanism and Catholic kings, to Scotland’s matrimonial bond to England.  In the authors view, Scotland was not a victim of empire, but helped author it, and indeed we see Scots exploring Africa,  arguing for a remolding of India in the British form, and penetrating deep into the American interior as Scots-Irish settlers.

I would recommend this book solely on the treatment of Enlightenment-era political philosophy along, as the author is strongest here. That section won me over despite some early black marks, as when he identified a founder of the Jesuits as a figure of the Reformation, and declared that the Protestant revolution made the Bible no longer a closed book.  Now anyone could hear it read, or read it themselves. What were they up to at church in the centuries prior, playing tiddlywinks?  The entire structure of Judeo-Catholic-Orthodox liturgical tradition is based on the reading of scripture! Still, the author managed to redeem himself wonderfully after that.

Citizen, librarian, reader with a boundless wonder for the world and a curiosity about all the beings inside it.
View all posts by smellincoffee →
This entry was posted in Reviews, Uncategorized and tagged America, Britain, history, philosophy. Bookmark the permalink.