In God’s Path: the Arab Conquests and the Creation of an Islamic Empire
© 2015 Robert Hoyland
303 pages 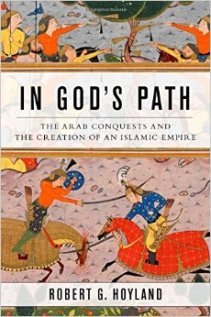 A Roman author referred to the Roman and Persian empires as the two eyes of the world — but they didn’t see the Arabs coming. In the span of a hundred years, a people from the desert wastes between Egypt and Mesopotamia had traveled from Spain to the Indus, bringing together a diversity of nations under one banner and laying waste to empires. History texts usually present a map of expansion as the sudden creation and explosive growth of Islam, but Hoyland argues that’s premature.  Instead, he examines the Arab conquests as…the Arab conquests, in which Islam is first the means of an alliance between Arab tribes that allows them to sack two ailing realms, and then is the means of forging their own empire that transcended tribal bounds.  Instead of merely attributing the Arab spring into empire as one motivated by religious zeal, Hoyland examines the Arabs as actors on the historic stage, and dwells on their political skill.

The result is a history that overturns elementary assumptions.  For instance, conquest and conversion were two completely different processes: even a province absolutely integral to the nascent Islamic civilization, Persia, was not majority-Muslim until the 14th century.  (Islamic provincial governors were by no means eager to force conversion:  non-Muslims were taxed by the government.) By preserving the structure of the societies they were conquering — relying on Christian and Persian scribes, civil officers, etc to retain their roles —  and offering completely secular benefits for joining the Arabs on their globetrotting campaigns, what began as a local city-state quickened into a global phenomenon.  Eventually, the religion of the Arabs, who had become the ruling class, would become the religion of a multitude, evolving along the way. Towards the end Hoyland dips into religious history,  reflecting on how the century of war, mixed defeats and triumphs, and the assimilation of various cultures shaped it. For instance,  he views the bar against images as a way for the Arabs to distinguish themselves against the decadent empires they had supplanted, but especially against the Romans, whose Constantinople twice defeats sieges here.   While there were some brief spots in the strictly historical narrative that rivaled Numbers for being a list of names and places without story to them, Hoyland’s insightful commentary more than makes for it, This is a history that illustrates not only the beginning of the Islamic world, but shows some of the shared machinery of empires in general. For a book on conquests, there’s comparatively little about the actual execution of battles; for that, a source like Crawford’s War of the Three Gods might prove a complement.

Citizen, librarian, reader with a boundless wonder for the world and a curiosity about all the beings inside it.
View all posts by smellincoffee →
This entry was posted in history, Reviews and tagged Arabia, Central Asia, Eastern Rome/Byzantine, history, Islam, Mediterranean, Middle East, Persia-Iran. Bookmark the permalink.