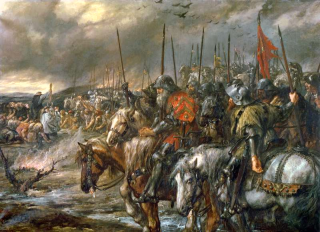 Four hundred years before, near a village called Azincourt, an English army had waited to do battle with the French, and on that October night it had rained and rained and the sky had echoed with thunder. It had been a drenching rain and next morning, as the rain at last ended, the field where the field where the English offered battle was a quagmire of mud. It was that mud, more than the English arrows or English valour, which defeated the French men-at-arms who, laden with fifty or sixty pounds of plate armour, had to wade through knee-deep mud to reach their opponents. The thick mud tired them so that when they reached Henry V’s line they were hacked down in a merciless display of butchery.

And on Sunday, 18 June 1815, the ground in the valley south of Waterloo would be muddy. It was an omen.

The Emperor either did not know the history, or else had decided that rain on the eve of a battle was no omen at all.

Citizen, librarian, reader with a boundless wonder for the world and a curiosity about all the beings inside it.
View all posts by smellincoffee →
This entry was posted in history, quotations, Reviews and tagged history, quotations. Bookmark the permalink.

2 Responses to Dawn of Battle