Posted on March 9, 2016 by smellincoffee 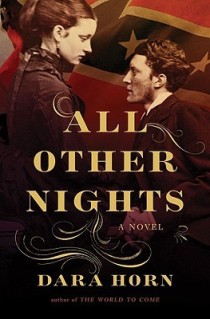 Why is this night different than all other nights?  Well, for starters, Joseph Rappaport is going to poison his uncle, on suspicion that he is plotting to kill Abraham Lincoln.   That move is the beginning of Rappaport’s career as an intelligence agent, using his family connections to infiltrate a Southern spy ring.  All Other Nights  is the enthralling story that emerges as he descends deeper into the shadows, finding – even as his body collects injuries from narrow escapes – a purpose worth living for.   Although running away from an arranged marriage at his father’s hands puts Rappaport into the ranks of the Union army,   it is when he tasked with seducing and marrying a young woman undermining the Federal campaign that the story fully begins.

Romance and work are a poor mix, as Rappaport soon finds. He wins the affections of his dazzling spy-rival,  a star of the theater who excels in sleight of hand. Her theft of his heart, however, is no parlor trick. The war makes a tragedy of their love, however,  doomed as their work was toward mutual self-destruction.  Joseph is soon broken in heart and body, marooned in the Tennessee wilderness.   A chance connection leads him to realize that not all hope is lost, however, and soon he is back in Virginia,  at the side of the Confederate Secretary of State, Judah Benjamin. His masquerade is two-fold, however;  while posing as a Confederate agent and gathering information for the Union, his true purpose in returning to Richmond is to find the family he helped destroy and save them and what little he feels of his soul from further ruin.

What a fascinating novel this is!  There’s a touch of small-world coincidence, but it’s handled deftly enough.  Joseph’s Jewish heritage isn’t just character flavoring;  the book opens at a Passover seder, the remembrance of Hebrews escape from Egyptian bondage the call for retribution.  Most of what Rappaport does throughout the novel is escape – flee the obligations his father seeks to impose on him,  out-run the consequences of his own actions – but  once he loses an eye he begins to see his way more clearly,  embracing a new life for himself even as Richmond burns.  The story thus combines historic espionage (ciphers, messages hidden in riding crops) and agonizing soul searching. There’s romance here, but unlike other authors Ms. Horn doesn’t force a play-by-play on the readers. She teases, as characters gaze at one another longingly, and then discretely moves on.  It has substance, too too, for Jacob’s is a love discovered accidentally and kindled slowly.  The final scene is a true finish, one that complete’s Jacob’s growth as a man capable of decision, not merely running or obeying masters above.

This is one of the best Civil War novels I’ve read in a long, long time.

Citizen, librarian, reader with a boundless wonder for the world and a curiosity about all the beings inside it.
View all posts by smellincoffee →
This entry was posted in historical fiction, Reviews and tagged American Civil War, espionage and commandos, historical fiction, Judaism. Bookmark the permalink.

5 Responses to All Other Nights