The Lost History of Christianity

Posted on November 9, 2015 by smellincoffee

The Lost History of Christianity: The Thousand Year Golden Age of the Church in the Middle East, Africa, and Asia — And How It Died
© 2008 Philip Jenkins
315 pages 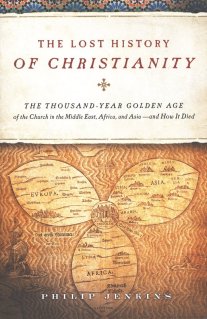 For the first millennium of the church’s history, Europe was less Christendom than a dismissed backwater. The heart of the faith was its fount in the middle east, where it saturated the landscape and spread through two empires across the vast expanse of Eurasia. Within five hundred years of Christianity’s millennial birthday, however, its reach had vanished, lost in political upheaval and newly arrived competition. Though advertising itself as a history of the global church,   Lost History is principally about religious transformation  in the middle east, with Christianity as its case model.

There is immediate intrigue in Jenkins’ history merely for the fact that his primary subjects are unrecognizable to most as Christian.  Around the Mediterranean,  Rome — in the person of the emperor — maintained a faith common to all.  Achieving and enforcing orthodoxy was the reason Constantine urged on the Council of Nicaea. Outside the empire, however,  Christianity grew wild, running bramble-like clear to Asia.  Aside from stray missionaries from the Latin and Greek church,  most of the Christians covered here belonged to the Nestorian church,  which retained an orthodox-like hierarchy outside the authority of  the Greco-Roman sphere, with hundreds of metropolitans and bishops. How much of “Christianity” really survives the trek to Asia is a question Jenkins does not pursue, though the mention of a “second Jesus” buried in India allows a lot of room for doubt.   The Nestrian branch found a particularly cozy home in the Persian realm, safe from Orthodux rebuke, but the African church would vanish almost overnight, save for the impressively resilient Copts.

The rise of Islam set the stage for the middle-eastern church’s downfall, but it was not strictly a matter of religious competition.  Jenkins records Islam and Christianity meshing at first; considering the  power of Arian-like sects which effectively denied the divinity of Jesus,  they shared much more common ground than not. (So much so that medieval personalities denounced Muhammad not as a false prophet, but as a schismatic!) The golden age of  Islam was built on such ground,  flourishing through  the communities of Christian Syrian scribes and researchers.As Islam grew in self-confidence, however, and especially after it began brawling with outside powers, the  Christians within its midst were viewed as suspect. When the Black Death reared its head for the first time, a wave of persecution followed —  Christians playing the part of scapegoat that was assigned to Jews in Europe. When new powers arrived on the scene, like the Mongols and Turks, they frequently inaugurated a new era of religious oppression; the Crusades were a response  to Turkish abuses, not the nigh half-century old occupation of Jerusalem by Islamic forces.  (Interestingly, the Mongols who destroyed the high water mark of golden-age Islam, Baghdad, first persecuted  Islam and then became its champions, persecuting Christians.) Political stress turned into religious persecution again and again, a theme that runs  clear to the 20th century, when an on-the-ropes Turkey decided to rid itself of minorities with suspect loyalties. The Armenian genocide was the result.  Early Christian activity in China and Japan perished after upsurges in nationalism, as well.

This history of religious transformation in the middle east is then used by Jenkins to examine the life of religions in general, their ‘struggle to survive’.  Though Christianity and Islam were rivals, they wore off on one another:  the Eastern Orthodox church’s iconclastic period (that ghastly preview of Puritanism) marks Islamic influence, and mosques modeled themselves on the architecture of churches. Such architectural borrowing went the other way in Spain, where rebuilding churches incorporated elements of Islamic design  into their structure.  Even after Christianity vanished from an area, it left its mark: in rural Turkey, for instance, parents continued to have their children baptized to ensure the blessing of God.  Jenkins  speculates on various reasons regions thrive or perish amid competition; he notes that the church in Egypt became part of the culture, while in other parts of Africa it merely existed as outposts, like Roman military encampments that disappeared when the Romans left. Those churches were sustained from without, rather than from within. Faiths can also hedge their bets by expanding;  when Christianity virtually perished in the middle east, it continued to flourish in Europe; even as it fades in Europe, it grows again in Africa.

All this fairly interesting, though the book has certain frustrations. Belief, for Jenkins, is a moot point;  Nestorian doctrine or what Jacobites practiced, none of this matters. All the reader is really given is politics and labels; there were people here, they called themselves Christians, and then they were killed.  Jenkins has a peculiar understanding of Christianity, announcing to the reader that understanding the early church is impossible because Christianity was driven from its home region.  Since when is Christianity like Temple Judaism or Islam, fixated on a certain patch of earth?  What is revealed is how unimaginative humans are at creating ways to persecute one another:  Just as Christians were made to wear patches identifying them as an underclass and forced to dismount at the approach of a Muslim, so in the 20th century German Jews were made to wear patches and blacks had to vacate the sidewalk at the approach of a white.  One wonders how ubiquitous these shaming behaviors are — did the Japanese practice them in China, for instance? The Lost History of Christianity is certainly relevant, given the ongoing slaughter of innocents at the hands of ISIS. It is a fascinating history of the middle east’s religious evolution,  though of limited use for truly learning about the ancient church outside of Rome and Constantinople.

Citizen, librarian, reader with a boundless wonder for the world and a curiosity about all the beings inside it.
View all posts by smellincoffee →
This entry was posted in history, Reviews and tagged Asia, Christianity, Eastern Christianity, Eastern Rome/Byzantine, Egypt, history, Islam, Middle East, Near East, Persia, Persia-Iran, religion. Bookmark the permalink.