Ornament of the World

Posted on September 4, 2015 by smellincoffee
Ornament of the World: How Muslims, Jews, and Christians Created a Culture of Tolerance in Medieval Spain
© 2002 Maria Rose Menocal
315 pages 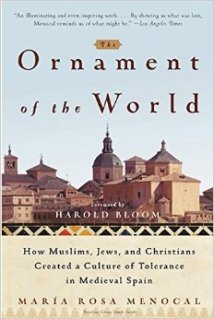 Ornament of the World is the story of a unique civilization in medieval Europe, one which ultimately disintegrated but left a hopeful legacy. For hundreds of years, Europe hosted a distinctly Islamic polity: Andalusia, the last stand of the Umayyads. The inheritors of Muhammad’s empire, they were driven out by a palace coup and reestablished themselves across the Mediterranean, building a glorious realm of their own.  They brought the best of an ascendant civilization and combined it with the remnants of the classical world; theirs was a world of fusion which allowed not only Muslims, but Christians and Jews to flourish and contribute as well. Ornament covers a thousand years of Spanish history, mixing literature, art, and politics to deliver with flourish the story of a lost but golden age.  Though heavily romanticized, the author’s  lovestruck tone makes it an enticing introduction to medieval Spain.

In subject and intent, Ornament is quite similar to A Vanished World, but much tidier. It begins, for instance,  with the rise of Islam, and from there moves forward in the time-honored chronological fashion. Following the death of Muhammad, leadership of the Islamic polity fell to a series of caliphs, one of whom – Ali – was especially consequential. Under his reign, the Umayyad caliphate,  Islam expanded in leaps and bounds. Success ever breeds resentment, however and Ali found himself murdered along with much of his family. A minor relation fled to Spain and there begins the story of Andalusia. Amid the first Muslim civil war, however, the princeling didn’t come alone. He and his followers found Iberia ripe for the picking,  and in a matter of time had conquered most of the peninsula.  “Woe to the vanquished!” was not the case, however, as the resident Christian and Jewish populations found themselves officially protected by the new state- – for a small consideration, of course.  Al-andalusia and its capital of Cordoba would go so resplendent that a later successor would presume to claim himself the Caliph, the princeps of Islam..  Islamic politics would be their undoing however; another faction would rebel against the reigning Abassids and make their stronghold in Tunis, just a stone’s throw from Iberia.  When the Umayyads later sought help from the north African Muslims against the resurgent Christians, their allies found their Spanish brethren much too decadent and proceeded to wreck and take over the place, Fourth Crusade style.
The loss of unity following the Umayyads did not destroy the creative culture they established, however; instead, leading city-states competed to out-do the other to restore that glory, just as after the fall of Rome states like Venice, Genoa, and Florence competed against the other. While the Italians engaged in petty wars and magnificent frescoes, the Moors engaged in petty wars and mesmerizing poetry.  Menocal has done prior work on Arabic literature, so not surprisingly language, prose, and verse receive a lot of attention.  The emphasis on literature extends to the Christians and Jews;  Hebrew adopted elements of Arabic verse and flourished in its own right. This was a period of intercultural collaboration;  in Toledo, for instance, Arabic and Jewish scholars worked on translating Aristotelian texts, which then drifted into Europe, replete with commentaries. Just as Muslim mosques and fortresses in Iberia began with Roman bones — so did resurgent Christian powers adopt elements of Arabic architecture, even in areas where the Umayyads and their successors never reigned.  Eventually the Castille-Aragon alliance would overwhelm the predominately Moorish south, effecting the Reconquest
Ornament compares well to its sister-rival, Vanished World;  for instance, the Muslim sack of Compostela,  which appeared rather randomly in Vanished, features here as part of the Umayyads’s  Iberian downfall.The same general who leads a military coup against them also attacked the Christian shrine. This same episode also accounts for the contrasting versions of St. James – one meek and mild, the other the Muslim-slayer.  After his shrine was desecrated and his pilgrims murdered, the peaceful James returned to have his revenge. Hell hath no fury like a saint scorned!  This covers nearly a thousand years of history in a mere three hundred pages, though, and a lot of that is taken up with swooning over literature and poetry;  this is utterly enjoyable, of course, but it does meant that the political sketch is an outline at best, so this is by no means a complete story. It is a loving tribute to the life of art and philosophy that found a home in Islamic Spain, however.

Citizen, librarian, reader with a boundless wonder for the world and a curiosity about all the beings inside it.
View all posts by smellincoffee →
This entry was posted in history, Reviews and tagged Christianity, history, Islam, Medieval, Mediterranean, religion, Spain. Bookmark the permalink.

2 Responses to Ornament of the World