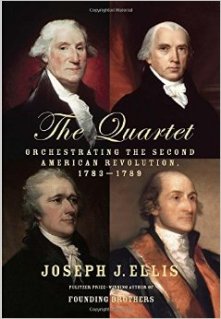 How many men does it take to make a revolution? The American Revolution is usually taken to include the rising animus against the political authority of Great Britain,  a desire for independence, and the war against Britain itself. The revolution did not create an independent American nation, however; it created thirteen. United in common cause against the armies of Parliament, peacetime threatened to cause dissolution. The liabilities of the Articles of Confederation, and the threat of the American seaboard becoming some Italian-like quilt of squabbling chiefdoms,,   prompted some of the states’ leading lights to vie not only for stronger ties between  the states, but for the creation of a more cohesive nation.  In The Quartet,  veteran Revolution historian Joseph Ellis examines the role of four particular men in effecting a transformational shift in American politics, forging a new American nation out of thirteen. What they created was only the beginning of that union, but it was enough. Here delivered is a history of the Constitutional convention, told through the men who made it so.
Argue as we may over the question of where sovereignty ultimately lies – with the States, or with the national government —   prior to the Constitution no one doubted that the states were sovereign. The Articles of Confederation, written to facilitate the war effort between the colonies-turned-states, gave the central authority virtually no muscle.  Genuine authority lay in the States and their respective armies, which frustrated to no end those tasked with the confederation’s  responsibilities.  Roger Morrison, for instance, initially tasked with getting the fledgling republic’s financial house in order, found virtually no support. The States balked at the smallest contributions, either from short-sighted shrewdness or long-term paranoia.   The states’ refusal to help with national provisions,  even to pay the soldiers who carried the hope of the rebellion on their shoulders,  nearly lead to a militia coup. Only the charisma of George Washington prevented matters from taking a tragic turn;  it would not be the last time his shoulders bore the weight of the American enterprise. .John Jay was likewise frustrated trying to arrange treaties, as the States insisted on making their own. Europe gazed across the Atlantic and viewed the new project with derision,  almost taking bets on when the states would go their own way.
The Articles were failing to make the American project a go,  but this was an age of ambitious and remarkably intelligent men willingly to be bold with their and other people’s fortunes. Having taken readers through the stresspoints of the Articles, Ellis shifts to the effort that Madison and Hamilton spearheaded to call a convention to amend the Articles, a convention that replace them altogether. This took some doing; many Americans were quite happy with an impotent central government. Virginians didn’t want to be saddled with other states’ debts, and Rhode Island didn’t want New York and other large states pushing it around. Any effort to strengthen an outside authority — a foreign power — smacked of tyranny.  Hamilton, Jay, and company were looking ahead, however; they saw that the world’s future lay in the  American frontier, and the states needed to work together if that was to be taken advantage of. At the first attempt in Annapolis to gather a convention, most of the states were no-shows.  But Washington himself supported the cause, and Madison came to the second convention prepared to argue the case for a Constitution. Washington was the trump card, the demigod who imbued the cause with moral authority; he even circulated the odd letter to lend active support. Madison stayed on the floor throughout the constitutional process, and afterwards he and Hamilton — with a little help from John Jay — took up the pen to argue for its ratification in New York. Washington remained vital to the constitutional cause even after it was written, signed, and ratified; if the nation’s first president were anyone but — if the electors faltered and put an anti-federalist anywhere near the executive seat — all efforts might be forfeit.   Here Hamilton plays another part, influencing the election to ensure that John Adams didn’t come close to threatening Washington’s victory.  Eventually the Federalists would be routed in what Thomas Jefferson referred to as ‘the second American revolution’ — his election — by then the course of the nation was set.
The Quartet is classic Ellis, seeing history as made by the actions of individual actors, not the inevitable outcome of enormous socio-economic reactions. Ellis’ creates an intimate history, one ruled by personal relationships; one chapter called “The Courting” speaks of Washington’s seduction and consummation by Jay and Madison into the nationalist cause.  While the four aren’t as tightly-knitted together as the title suggests (“orchestrating” the revolution as if they were a conspiracy with an intricate plan),  their unity at an opportune moment caused a sea change in American political history.  Though favoring the Federalist cause, Ellis doesn’t too much overplay his hand: he points out for instance that the Federalist Papers only have limited use, being the propaganda work of the nation’s most avowed nationalists, and written for a particular New York audience.  His emphasis on relationships does prompt a misread of Madison’s character:  while prior to the Revolution, Madison argued for the Federalists and a national union; afterwards he was the darling of the Democratic-Republican cause against Federalism. Ellis sees this as entirely the result of Jefferson returning to America and Madison abandoning his ideas to support his mentor, as if Madison wasn’t capable of having nuanced political sensibilities that supported a golden mean between centralization and anarchy.  These are slight quibbles, however; Ellis has yet again produced an enthralling political drama, perfect for a quick dip into Revolutionary history.
Related:
Madison and the Making of America, Kevin Gutzman, focusing entirely on this Constitutional Convention where Madison played center stage.
Founding Brothers,  Joseph Ellis.   Of all the Ellis I’ve read, this places the most emphasis on political relationships.

Citizen, librarian, reader with a boundless wonder for the world and a curiosity about all the beings inside it.
View all posts by smellincoffee →
This entry was posted in Politics and Civic Interest, Reviews and tagged American Revolution, Joseph Ellis, politics, Politics-CivicInterest, US Constitution. Bookmark the permalink.

2 Responses to The Quartet