The South since the War

The South Since the War: As Shown by Fourteen Weeks of Travel and Observation in Georgia and the Carolinas
© 1866 Sidney Andrews
400 pages 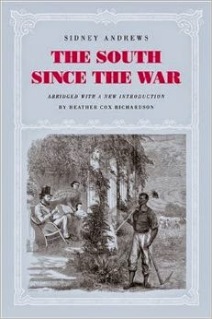 In the autumn of 1865, as the dust and ashes were still settling over the graves of the Union and southern dead,  an Illinois journalist decided to spend the season exploring the land of prodigal brothers and late enemies.   His The South Since the War combines a travel diary with obsessive political journalism, recording the proceedings of three state conventions (the Carolinas and Georgia) as well as a conference of freedmen.  He is, upon completion, not a fan — disappointed  in shabby hotels, defunct railroads, and the fact that the war has not given the southerners a thirst to transform themselves into New Englanders.  They remain a people apart — ruined, owing to having been beaten in the fields, but still defiant.

There is immediate interest in Andrews’ timing; so close does he follow on the heels of the war that some held in slavery have not yet heard that the institution was abolished.  Andrew Johnson is President, and for the moment charity prevails: pardons are being granted liberally, and the old aristocracy ready to resume their seats in Congress. After witnessing the three conventions,  Andrews closes with a warning that to forgive the south too easily would be to throw away the best chance the North has at remolding the old confederacy in its own image. Indeed,  in the year following  Congress will rebuke President Johnson for his grace, and they will institute some of the measures Andrews suggests, like granting suffrage en masse to male freedmen to undermine the old elite. But the hour of Reconstruction is not yet, and here readers are granted a look into that fleeting moment when the old South’s destiny was in its hands.

Andrews is primarily interested in politics,  and endeavors to take the temper of the polis by not only attending back-to-back conventions, but in engaging southerners in conversation —  at least, planters, freedmen, and some merchants. He is more revolted than interested in poor whites, who don’t take baths,  don’t have manners,  show none of that Puritan work ethic, and don’t  have an excuse. The freedman may be ignorant moral wretches, Andrew muses, but their growth was smothered by the old planters, who used it as a justification to keep them in bondage.  The conversations reveal a South defeated in arms, but not in spirit:  at best,  people acknowledge losing the war and are resolved  to make the best out of the peace. At worse, they echo the lyrics of a popular song at the time:

The south was beaten — thousands upon thousands of young men dead, leaving a generation of spinsters and orphans and   its finest cities were smoking ruins —  but the southerners remained obstinate. Andrews is baffled, appalled, and greatly annoyed. Their heroes are dead, in prison, and surrendered, but the conventions  act as though the first  Federal boot never crushed southern soil. They abolish slavery and repudiate the secession ordinances only grudgingly and debate whether or not they should petition the North to release Davis as a  token of good faith.  Do they not realize they lost?  The crusade was triumphant, but still the “heresy of States’ rights” persists.   Although there are a few who own to being true-blue Unionists, who regret the late unpleasantness and the secession that led to it, by the large southerners are still unrepentant. A great many of them may scorn the fools who led them into the war, and the fools who bumbled it (Davis is either praised or scorned here, with no one offering a moderate opinion of him), but their devotion remains to the states which bore them. The question put to every delegate is this: did he, in the conflict, go with the State, or with the Union?    No one quotes Stephen Decatur — “Our country! In her intercourse with foreign nations, may she always be in the right; but our country, right or wrong.” — but the Marylander’s spirit is theirs.

Andrews’ attitude is certainly skewed by the fact that he is writing for an audience back home, one thrilled with his reports of southern savagery like the account of Andersonville. Could he as a private individual have really expected southerners to act like chastened schoolchildren, repenting of naughtiness?  Eventually southerners would embrace the Union, grow to love again the striped banner that the good ol’ rebel ‘fit all he could’, but an embrace of the old was never lost.  Could Andrews seriously expected southerners to want to become northerners, to rebuild Charleston in the shape of Boston?  He certainly believes they should: can they not see how scornful their rulers are of them? They are without education, with no exposure to grace and beauty: their lives are bereft of civilization itself.   His own horror at prolonged exposure to belching, burping, cussing farmers is matched by pity for them.  Although his constant sniffing at railroads and poor food can be annoying, his attempts at brotherly love are noble considering that at one point he is literally run out of town by a mob for interfering in a fight between a freedman and a cantankerous soldier.

Andrews’ scornful Yankee-ness will no doubt be grating to a southern reader, but he raises a few interesting points, like the need for education and and the curbing of economic centralization. One man, an intellectual descendant of the brothers Gracchi, says:

Give a man a piece of land, let him have a cabin upon his own lot, and then you make him free. Civil rights are good for nothing, the ballot is good for nothing, till you make some men of every class landholders. Give the negroes and poor whites a chance to live — what [do they] want of a vote?  (p. 371)

Andrews doesn’t dwell on this, viewing a man with a ballot as king, but a vision of the south peopled by an abundance of citizen-farmers, secure on their homesteads and dependent on nothing but open lanes for trade, is obviously superior to an empire of massive plantations run on slavery with the poor white remainder existing on the fringe. A republic of homesteads is a positively Jeffersonian vision — one the south would have shared in. Of course, that’s not the way reconstruction actually developed; modernity has made resourceless proletarians of us all.   There is no doubting the importance of Andrews’ work, though, given how many Reconstruction measures would be drawn up to address the other issues he raises: the need for moral and and technical education among the freedman, for instance, the matter of power still being in the hands of the elite.   As a proponent of local autonomy myself, I despite the specter of outside meddling…but this is, sadly, a case where we had it coming.

Citizen, librarian, reader with a boundless wonder for the world and a curiosity about all the beings inside it.
View all posts by smellincoffee →
This entry was posted in history, Reviews and tagged American Civil War, American South, history, memoir, Reconstruction, travel. Bookmark the permalink.

1 Response to The South since the War