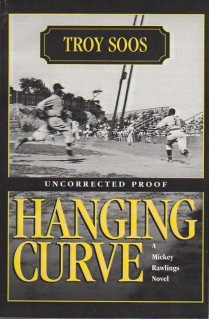 St. Louis, 1922. Babe Ruth reigns as the king of baseball. Mickey Rawlings is no king, not even a prince, but he is at least in the peerage: a utility infielder for the St. Louis Browns.  This season, though, there’s more than  baseball on his mind. A man has been murdered, and his death may plunge the city into bedlam.  The story started when Rawlings,  desperate for a chance to play baseball instead of sitting in the dugout, accepted an intriguing offer to play one game between two local clubs  — one of them being part of the Negro Leagues.   Professional white  ball players are forbidden from taking the field with black players by MLB management, and Mickey  was eager to test his skills against such obvious talent.  Crawford pitched magnificently, humbling the opposition, and then – days later – he was found lynched, hanging from the stadium’s walls.  There had been a fistfight at the game, and members of the Klan hovered about, but – would anyone murder for a baseball game?   With little else to do on the bench, Rawlings digs for answers.  His search casts a light on the simmering racial tensions in  Missouri, the widespread influence of the Midwest Ku Ku Klux, and a prenatal Civil Rights movement.

The golden age of baseball was not a golden age for its black fans.  Segregation flourished in early 20th century America, especially as southern blacks streamed northward in search of jobs. Rising racial tension led to a burgeoning Klan, and not only in its old home of the South:  the 1920s Klan was strongest in the midwest, practically taking over Indiana.  Racial unrest is the backdrop of Hanging Curve;   five years before its start, labor riots turned into a race war, leaving areas of East St. Louis utterly ruined. The death and mayhem of those hours haunts the memory of those who remain, but matters are rapidly deteriorating once again, apparently instigated by a baseball team. After Rawlings plays his match against members of the Negro League,  matters go awry. He played  unsuspectingly, with a team sponsored by an auto dealership, and many on it held an association with the Ku Klux Klan.  First a black player is hung, then beatings and arsons follow in reprisals and counterstrikes.  Those who survived the riots on both sides know where this is going, and it isn’t a road  anyone wants to go down.  Blood feuds can take on a life of their own, though, and Rawlings has to work overtime to find a way to nip this one in the bud. He works closely not only with one of the dealership’s Klan members, but with a NAACP lawyer to investigate who killed Crawford…and why. These budding relationships introduce Rawlings to two worlds which he had been otherwise blind to: the widespread popularity and influence of the Klan, and the segregated existence of America’s black citizenry. Although the courts maintained segregation as separate but equal, not until Rawlings struck up a friendship with a black lawyer did he realize how factually bankrupt those claims were. In St. Louis, for instance,  the streetcars maintained two seperate lines,  but alloted so few cars and conductors to the black line that passengers were forced to wait far longer than their white counterparts. The Klan, too, was a surprise:  Rawlings thought it just a gang for roughneck racists, not suspecting the organization had a more sinister attraction on the respectable, masquerading as a civic organization.  The pieces of the puzzle indicate to Rawlings that the true motive for that first murder are just as hidden in deception as the Klan members who hovered around the game.

Hanging Curve is one of the most interesting  mysteries I’ve ever read, with a setting that invokes both warm, sentimental nostalgia for the lovely game of baseball and the sad reality of racial tension in America. Consider: the St. Louis Browns, who played in a city a stone’s throw from Ferguson, are these days better known as the Baltimore Orioles. But as Rawlings discovers in Hanging Curve,  there is more to social dramas both in our day and in his than mere racism.  Rawlings was able to tease out the truth,  but will we?

Citizen, librarian, reader with a boundless wonder for the world and a curiosity about all the beings inside it.
View all posts by smellincoffee →
This entry was posted in historical fiction, Reviews and tagged 1920s, baseball, Civil Rights, historical fiction, mystery, race. Bookmark the permalink.