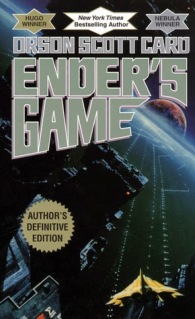 Andrew Wiggin is only a young boy, but in the eyes of his world’s leaders, he may be humanity’s only hope.  Decades ago, Earth was ravaged by invasions of swarming insect-like creatures and fought them off only by the skin of its teeth. What made the difference was superior command ability – a man who performed a miracle, a virtual inheritor of Alexander the Great.  Although the skies have been silent since, all Earth knows that somewhere in the depths must be another insectoid fleet, a third invasion, and  against an  empire stands one frail planet…and one not-so-frail boy. Ender’s Game is the story of a young boy chosen to be groomed to be Earth’s next saviour, The cost of Earth’s salvation is his own childhood, as he is forced to leave  his sister on Earth behind for many years: enrolling at six, his first leave is scheduled for his sixteenth birthday. (He doesn’t too much mind leaving his brother behind, since Peter is an abusive jerk with dreams of world conquest.)  Ender’s Game is the story of Ender’s upbringing on stations in space, living and training with other gifted children every day in highly elaborate zero-gravity games  Ender is the best of the best,  and forced to be so by the adults who condition him psychologically to be the ideal general — not only strategically smart, but forcefully decisions, a man capable of taking the lives of thousands and the future welfare of millions into his own hands. Although the sci-fi setting is inescapably important, the book is  driven by character drama — the book alternates between Ender’s story and that of his sister Valentina’s, who with Peter makes the Wiggin children a trio of dangerous intelligence.  Although Ender engages in combat virtually every day,  this comes in the form of in-person zero-g laser tag games or computer simulations.  Ship to ship combat is rendered only distantly, but that makes it exciting is experiencing Ender’s thoughts as he takens in the chaos of the battlefield, sees patterns emerging, and then creates a plan on the fly to check the adversary. Ultimately things deeper than just a boy growing up to find greatness during a war; Card gets a little philosophical toward the end, a trend which I understand continues more in books like Speaker for the Dead.  Though I read this primarily for a reading challenge, I could see continuing in the series.

Citizen, librarian, reader with a boundless wonder for the world and a curiosity about all the beings inside it.
View all posts by smellincoffee →
This entry was posted in Reviews, science fiction and tagged children's literature, Children-YA, science fiction. Bookmark the permalink.