Posted on April 8, 2015 by smellincoffee 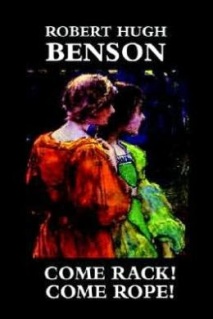 Dear Miss Manners:
My father, having long been both a leader of resistance against religious tyranny and an inspiration to his countrymen, has surrendered most abjectly and is pestering me into joining him. Whatever shall I do?
Doubtful in Derbyshire

Dear Doubtful:
Flee to Rheims and become a priest, or marry me.  Your pick!
XOXO
Miss Manners

Young Robin Audrey becomes an enemy of the State when his father forces him to choose between Caesar and Christ. The Audreys are, or were, recusant Catholics; that is, Catholics who refuse to convert to the increasingly Protestantized Church of England.  For years a gentle truce held in Derbyshire:  its squire,  Robin’s father, absented himself from church but paid fees for doing so. Thirty years into Elizabeth’s reign, however, times are changing. her reign imperiled by rumors of palace revolt and am impending invasion from Spain,  the Virgin Queen wages war against her own people  to maintain distance from Rome, going so far as to hunt down and execute any priest of the Catholic church.   Fees and fears piling up,  Old Audrey finally surrenders: but his son cannot. Raised in the ancestral faith of Europe, he cannot abandon it for mere convenience’ sake. Seeking moral support and advice from his secret fiance, Marjorie Manners,  he realizes a call to the priesthood. Retreating to France to take on holy orders, he thus becomes a hunted foe of the crown – and so begins a tragic romance and a stirring tale of resistance against religious persecution.

Our heroes here are of course Robin and Majorie, who sacrifice their own happiness out of devotion to higher deals. A Catholic priest, of course, cannot marry, and even if they could  there would be little domestic bliss to be found when one party is constantly in hiding and the other constantly doing the hiding. Both resist the Crown’s intrusion into matters of conscience in their own way; Robin, by  traveling and ministering to the hidden faithful, and Marjorie by helping hide other priests who are engaged in the same business. In an ideal world, perhaps the Queen would have let her  Catholic subjects be, but the English Reformation was far from ideal. Not only has the Pope issued a bull absolving Catholics from fealty to Elizabeth, thus casting a treasonous light upon them in her eyes, but there are serious threats of assassination to contend with. Who but Catholics would want to drive the Protestant prince of England out, and replace her with Mary, Queen of Scots? And who but Catholics would welcome an invasion of England by Catholic Spain?  Robin and Mary are not violent insurrectionists, and certainly no sympathizers to any Spanish invasion —  indeed, they urge their countrymen against rash actions. But war would not be the horror that it is if it did not  consume the lives of innocents, and so it is that virtually every character introduced after the opening chapter will be executed at the hands of the State.

But where sin abounds, there grace does much more abound — and there is grace to be found here. Robin lives a life of grace,  risking torture and death so that he might offer comfort to the hounded – – even listening to the confession of Mary, the imprisoned Queen of Scots. Some of the tragic beauty here comes from the relationship between Marjorie and Robin; even though they cannot marry,  love still unites them. It is not an erotic love, but they are very much partners in the same great enterprise. Another of the tale’s wrenching aspects is the relationship between Robin and his father, who have become enemies: in the last hour, it is the father’s unwitting signature on the warrant which damns him — and yet  there is absolution. The finish is heartrending, but fitting.

Citizen, librarian, reader with a boundless wonder for the world and a curiosity about all the beings inside it.
View all posts by smellincoffee →
This entry was posted in historical fiction, Reviews and tagged Britain, Catholicism, Christianity, English Reformation, fathers and sons, historical fiction, Man vs State, religion, Tudor England. Bookmark the permalink.