A Short History of Byzantium

Posted on November 8, 2014 by smellincoffee 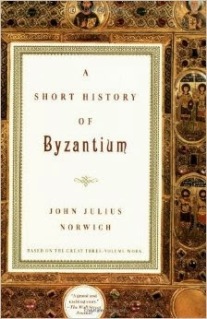 Rome fell in a.d. 474? Tell that to the Byzantines, who for centuries persisted in being an afterimage of the classical world, evolving through the medieval before their collapse a century after the west had fallen to barbarism. A Short History of Byzantium takes in over a thousand years of history, from Diocletian’s administrative division of the Roman Empire into two halves to the fall of the great city Constantinople to the Turks.  There is great difficulty in a hurried survey like this,  subjecting the reader to a tide of dates and names, but John Julius Norwich is a storyteller; under his pen, some  events, and some people,  are so outstanding that they serve as landmarks for the rest.
A Short History of Byzantium begins with a story more familiar, for the first chapters are a history of the Roman Empire as the west remembers it: Roman. Constantine the Great moved the center of the Roman Empire to  the  east, founding a new Rome on the site of an old trading-city, Byzantium,  a city that would later assume his name: Constantinople.  The move created a fresh start, but allowed the Emperor to focus on the nation’s rising threats:  powers to the east, especially the Parthians. Rome vs. Persia; it’s a battle between titans of the classical era.  The book’s scope is such, though, that the classical gives way to a world at its conclusion which is more like ours; we see here the birth of the Holy Roman Empire,  the rise of Islam, the explosive expansion of the Ottoman Turks.  Throughout all this tumultuous change was the Empire,  warring against and making common cause with these changing powers through the ages.  Byzantium was also witness and party to Christianity’s evolution.  The effective founder of the Byzantine heritage, Constantine, was the man who legitimized Christianity within the Empire as a whole, and put it on the path to becoming the binding religion of the west as a whole. But that binding could not quite stand the stressors of the ages, the gulf of cultural differences between Rome proper and the east, and Christianity once unified eventually severed into two halves, Roman Catholicism and Eastern Orthodoxy. But the cut was never a clean one; instead, there were tiny fractures that opened and closed through the centuries, forever dynamic but trending in the end toward rupture.
The empire itself is the subject of considerable interest, somehow holding on through the centuries despite the staggering variety of challenges it faced. It defended itself from one invasion after another, from Bulgars, Goths, Vikings, and later on Arabs and Turks, and relied on the oddest allies. In resisting the Norman attack on southern Italy, for instance, it employed disgruntled Anglo-Saxons who had left England in disgusted after  the Normans conquered it. A nation surviving a thousand years of history must have some institutional stability, but it is hard to see after this survey;  only 88 people held the throne in that span,  but they seem to go with great haste,  and often bloodily. At times even western Rome appears sane by comparison, though that’s excepting monsters like Caligula and Nero. Not that Byzantium is without its characters, listing as emperor men like “Michael the Sot”.  There are utter boors and monks, noble heroes and complete, degenerate cowards.   There are women, too, some who reign through their husbands, and some who reign in their own right.  They make for a colorful cast, and though I knew the general trend of the story (an image of the Turks besieging Constantinople has haunted my mind since seeing it in grade school), the turns it took were surprising indeed. The empire rose and fell through the centuries, contending against all manner of adversaries, but the fatal dagger came at the hands of those who ought to have been its defenders; the Crusaders, who in the Fourth Crusade, sacked the city. Even the fluke victory the Turks inflicted on it years prior did not break the empire so badly as that sacking.

This was in short quite a treat, exposing me to a world of information previously hidden away, but of utter interest. From the word go, Byzantine history was wrapped up in the west; how its memory became lost is a puzzle, considering how important western powers viewed it almost until the last, straining to wed into its line to unite the  German ‘Roman’ empire and the empire of Old.  Entertaining in many respects, it also delivers a history of Europe from another aspect, and is quite commendable.

Citizen, librarian, reader with a boundless wonder for the world and a curiosity about all the beings inside it.
View all posts by smellincoffee →
This entry was posted in General and tagged Christianity, classical world, Eastern Europe, Eastern Rome/Byzantine, Medieval, Middle East, Near East, religion, Rome, Turkey. Bookmark the permalink.