Posted on February 18, 2014 by smellincoffee 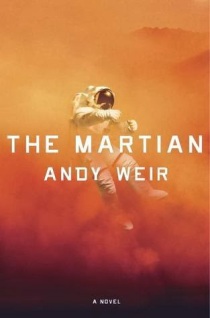 I was elated!  This was the best plan ever! Not only was I clearing out the hydrogen, I was making more water!
Everything went great right up to the explosion.

Mark Watney never thought his Mars mission would make history. He was the eighteenth man on the planet, a member of the third  mission there; who remembers the third man to set foot on the Moon, let alone the fifteenth?  But when a dust storm threw a communications setup into his chest and his colleagues were forced to quit the planet before recovering his body lest their ride home be destroyed,  Mark woke up to find himself the only man on the planet – the only man around, in fact, for millions of miles. Robinson Crusoe, you ain’t seen nothin’ yet.  Fortunately for Mark, not only did the aborted mission leave him with his five crewmates’ supplies, but he’s a botanist and a mechanical engineer.  Mark’s own mind – his scientific experience and creativity,, along with a   if-this-doesn’t-work-I’m-dead-anyway intrepidity — is his best resource, though. Not even rationing his rations will see him through the four years that will pass before the next Ares mission lands. And so Mark tries to find a way to survive, to turn his limited equipment and Mars’ land and air into life.  The result is The Martian, a captivating and absolutely hilarious memoir of survival that sees him battling physics with ingenuity and despair with laughter ’til the very end.

The Martian is easily the most entertaining science fiction novel I’ve read, a story of  relentless problem-solving and dogged humor.  It’s not Mark’s story alone — Weir  occasionally zooms back to Earth as NASA tries to cope, and  he occasionally shifts to a third-person narrative when something colossally bad is about to happen to our stubborn survivor — but most of The Martian is told, journal-form, recording Mark’s reactions, plans, and thoughts on life so far from humanity. He is never free from worry; no sooner has he found to solve a problem by physics, chemistry, botany, or setting something on fire, than does something else go wrong. Sometimes solutions create their own problems, because his resources are limited and not even an engineer-botanist can think of everything. Add to that the fact that Mars is an environment hostile to human life, a severe place that punishes mistakes with death (freezing, exploding,  starving, take your pick), and there’s no end to his troubles. But he never stops trying, and he never becomes dispirited permanently. There’s no one on the planet to have  a pity party with, and nothing to do but try to put the pieces back together again and move on.  Eventually the story widens; Mark can’t communicate with Earth, but they do have satellites, and the only bit of life on the entire planet can’t avoid being noticed forever. If he can only find a way to endure!  Despite the seriousness of his situation, the narrative is easy-going, almost light-hearted. Mark is keeping logs to keep track of his progress and maintain his sanity, not give an audience a respectable tale of man vs. the elements. He records in detail his thinking about wrangling technical problems, but he’s also constantly joking or complaining or chattering.. (“I tested the brackets by hitting them with rocks. This kind of sophistication is what we interplanetary scientists are known for.”)  Part of the appeal of The Martian is the fact that, though this is science-fiction, it’s not far removed from contemporary technology; the people in this novel  don’t need any background, because they’re us. This is an immensely personable science-adventure story, abounding in puzzles and smart remarks.  It’s quite impressive considering it’s Andy Weir’s first work, and I would definitely recommend  it, especially to those with any interest at all in space flight.

“[The laptop] died instantly. The screen went black before I was out of the outlock. Turns out the ‘L’ in ‘LCD’ stands for ‘Liquid’. I guess it either froze or boiled off. Maybe I’ll have to post a consumer review: ‘Brought product to surface of Mars. It stopped working. 0/10’.”

Citizen, librarian, reader with a boundless wonder for the world and a curiosity about all the beings inside it.
View all posts by smellincoffee →
This entry was posted in Reviews, science fiction and tagged Andy Weir, go for Mars, human space flight, science fiction. Bookmark the permalink.

6 Responses to The Martian