Forgotten Voices of the Great War

Posted on February 15, 2014 by smellincoffee 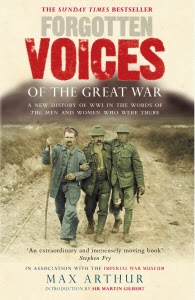 Forgotten Voices of the Great War is a chronicle of the first great war,  a story told not by one author but many. Interviews and written recollections from soldiers and civilians, young and old, give readers a first-hand view of the debacle as it unfolded. The editor divided the book into five year-by-year sections, and begins each with a brief (two-page long) summary of the year’s fighting before allowing the participants of history to give the full, intimate account.  Aside from the occasional insertion of dates and battle names, the narrative consists of first-hand excerpts, generally no more than a paragraph long.  There are distinct home front and military sections, and no bias as far as the soldiers’ attitudes go:   the account begins with feelings of thrill and anxiety at the war’s declaration, but by the first few months virtually everyone sounds weary. There’s no polemicizing here, though after witnessing the despair of soldiers enduring these long years at the front  what reader can escape antiwar sentiment?  All of the combat accounts are set on the Western Front or in Gallipoli,, but there are accounts of Germans, French, and Americans mixed in with the Commonwealth nations’ excerpts,  constituting half the work. Forgotten Voices leaves grand narrative behind and allows readers to experience the grisly details – the stories of soldiers tripping through dark trenches filled with cables, of the wounded sinking into muddy shell holes and attempting to effect their rescue by singing loudly amid the clamor of combat;  and of course, the rats, living in the legions of bodies and growing as large as dogs, with shooting them a dismal option because their own bodies will only add to the stinking foulness. It’s not pretty, but such is the nature of war and modern readers would do well to heed these voices instead of those singing of war’s glories.

Citizen, librarian, reader with a boundless wonder for the world and a curiosity about all the beings inside it.
View all posts by smellincoffee →
This entry was posted in history, Reviews and tagged Europe, history, memoir, military, The Great War. Bookmark the permalink.

2 Responses to Forgotten Voices of the Great War