The Little Way of Ruthie Leming

The Little Way of Ruthie Leming: A Southern Girl, A Small Town, and the Secret of a Good Life
© 2013 Rod Dreher
292 pages 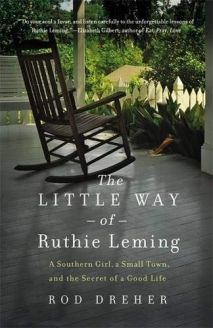 What is a meaningful life, but one lived in close connection with others?     Journalist Rod Dreher was forced to consider this when he endured a family tragedy: his little sister Ruthie at age 40, was diagnosed with lung cancer despite having never smoked.  Compared to him, she was the perfect child:   she fit into her family and her community like a hand in a glove, and her life was the very image of wholesome: married to her high school sweetheart (a fireman) , mom of three bright, happy, girls, and beloved of her students.    Dreher, meanwhile, was the black sheep of the family —  always yearning for more, and anxious to leave the family place behind. And yet when he returned home to be with Ruthie,  he witnessed the love that she had invested in people over the years bear fruit, the community rallying around her, supporting her family in its darkest hour.   This story of an ordinary woman with an extraordinary impact on those around her thus becomes an argument for people devoting themselves to what matters: the people around them, not abstractions.

The Little Way is a heartbreaking and beautiful story, but it’s harder for me to review it because I know now that it’s only part the story: I know that it continued in How Dante Can Save Your Life, because Dreher was not able to recapture the life his sister had led when he moved back home to reintegrate himself into the family & local community. Interestingly, though, Little Way  offers a forewarning — to Rod himself, though perhaps he didn’t grasp it at the time. When having a heart-to-heart with his father, Rod learned that the old man —  whose commitment to the family place, the local community, and the family itself was total and absolute — regretted  having not pushed the boundaries in his own youth,    regretted letting himself be pushed onto one track when his talents beckoned him down another.   Dreher here realizes his father had made an idol of family — but this is exactly what Dreher struggles with later,  what Dante helps him realize.    However important that lesson, it’s this middle of the story that still speaks to many.   We are a nation of increasingly lonely, depressed, and anxious people — and this is no accident, because year by year we become ever-more absorbed into ourselves….or into the the role we think we play in some abstract political drama, nevermind the lack of any real work we put into our local places.  Health is membership; belonging.

Although I’m sure this was a difficult story for Dreher to tell, I’m grateful that he did: his sister is a powerful witness for the virtues of a simple, ordinary life, lived in love.

Citizen, librarian, reader with a boundless wonder for the world and a curiosity about all the beings inside it.
View all posts by smellincoffee →
This entry was posted in Reviews and tagged American South, death and dying, localism, Rod Dreher. Bookmark the permalink.