Go Directly to Jail: The Criminalization of Almost Everything
© 2004 ed. Gene Healy
194 pages 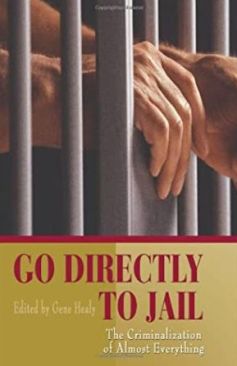 What good are laws so numerous they cannot be known, or so opaque they cannot be understood?  James Madison knew enough to ask that question. Modern legislators and regulators do not.   In Go Directly to Jail,   Gene Healy collects several pieces criticizing the  eye-opening expansion of federal crimes in the last quarter of the 20th century, and the deleterious effects of this expansion on American governance and society alike.  The articles are abbreviated versions of longer policy papers, and  while they’re detailed reading they’re not necessarily dry – the most challenging of them is the piece on HIPPA violations.

“Don’t make a federal case out of it” used to mean something – a warning not to exaggerate something’s importance.  But federal crimes no longer concern themselves with important things:  more often than not, they concern trivialities,   which they treat as important.  Federal crimes multiply exponentially by the year,  driven by regulatory agencies which fund themselves partially through fines – who thus have every incentive to create new offenses they can bill for, creating less a system of justice and more an organized structure for looting. Four areas are considered in the included essays: the environment,  healthcare, gun control, and Federal sentencing guidelines.   Each article has unique lessons ; overzealous criminalization of HIPPA ‘violations’ distorts medical practice, for instance, by pushing doctors into larger collectives for protection, and skewing their prescriptions towards what’s legally safe rather than what’s needed.

More important are the general lessons. Destroyed completely are the basic conceits of Anglo-American common law: that for something to be a crime,   there must have been both bad intent and bad action.  To the modern state, intent is irrelevant; actual harm is irrelevant.  What matter is:   is there a rule you’ve broken that we can exploit to the hilt? In some of the case studies here, a man who cleared an area of industrial debris, then began  filling in pits in the landscape to level it it, was fined and imprisoned for polluting. (Toxic leachants are fine; but dirt, by god, dirt is just too much.)

A  state run by a multitude of laws that no one can fully understand, or even know that they’re violating, is essentially lawless. If people  have no reliable way to tell what’s illegal and what’s not,   and if they are tarred with the same brush as rapists and murders for bookkeeping or legalistic mistakes,  why should they take the law seriously? We effectively live in a Dolores Umbridge legal system, supported only by those empowered by it:  lobbyists, lawyers, and bureacrats.  The law’s moral power, which is far more important than the threat of enforcement (an awake conscience is a more forbidding presence than any state), is undermined completely by an unnavigable legal system with harsh reprisals for innocent mistakes.

This is an infuriating collection of pieces, presumably much dated by now, and I suspect the trend has gone towards more criminalization instead of less — although some progress is being made on the marijuana front at the state level, at least.  The highly focused aspects of several of its pieces might  make casual readers spook and run: I’ve had this book five years or so and even now that I’ve fully read it, the healthcare chapter still has parts a little beyond my ken.  This is an important aspect of understanding DC’s police state, though, especially in the wake of these police-inflicted homicides– the persons being killed are often swept up under odious charges like selling loose cigarettes.

Related:
You Have the Right to Remain Innocent, James Duane. A lawyer’s take on the same problem, with his own solution: don’t talk to the cops, ever. Ever.  Ever.

Citizen, librarian, reader with a boundless wonder for the world and a curiosity about all the beings inside it.
View all posts by smellincoffee →
This entry was posted in Politics and Civic Interest, Reviews and tagged law, Politics-CivicInterest. Bookmark the permalink.

3 Responses to Go Directly to Jail