Posted on April 6, 2020 by smellincoffee 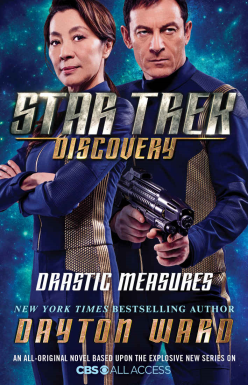 The deliberate murder of four thousand people, half the colony’s population, began with an act of mercy.   Refugees were given a new home in the sparsely settled world of Tarsus IV, more than doubling its population….but their arrival inadvertently introduced a toxic fungus to the ecosystem,  utterly destroying  all agriculture and corrupting most unsealed foodstuffs. The worst was yet to come. Commander Gabriel Lorca,  chief of the small Starfleet outpost on the colony,  had his very faith in humanity shaken by Governor Kodos’  cold-blooded decision  to kill four thousand people in order to allow the remaining four thousand to survive on half-rations until help could arrive. The slaughter was made still worse by its pointlessness: early relief came with a mission led by Captain Phillipa Georgiou.   Starfleet’s officers and a few colonial survivors, under active attack as the villainous governor tries to make his escape,   have their work cut out for them. Dayton Ward’s own work,  creating a  Discovery  story that links to the original series, was similarly challenging – but both he and his creations prevail.

Although I was slow to warm to Star Trek Discovery,  by the end of its first season  I was binging episodes,  taken in by its characters and the connections being made to the regular Trekverse.   For similar reasons Drastic Measures  drew my attention: not only was it by one of the authors of the teriffic Vanguard series, Dayton Ward, but it starred two of my favorite DSC characters (Captains Lorca and Georgiou) and featured a connection to one of the first TOS episodes I ever watched, “The Conscience of the King”, in which a Shakespearean actor is exposed as the infamous tyrant, Kodos the Executioner – and Kirk’s life is at risk as one of the few people who could positively identify him.  Although Ward’s connections to the original episode are firm (Kirk supplies the security team hunting Kodos with digital imagery),   the DSC characters take center place here.

Lorca’s character in DSC has a bit of a secret, as those who’ve watched it know,  so this book offers a special treat in giving us a a glimpse at the…’other’ Lorca, shall we say?  I don’t want to spoil anything for future viewers of DSC, but  he’s recognizable here  —    absolutely driven, this time by having lost a loved one to Kodos, and having unwittingly viewed her execution on colonial broadcasts live.  He struggles between a desire for justice and one of revenge, and at some points his colleague Georgiou —   commanding a relief ship sent to the colony —  serves as his conscience.  Speaking of, considering how quickly she perishes in DSC’s run, I was glad to see her ‘return’ — and in a happier way than spotting her mirror-universe counterpart at the end of DSC-1.   The novel is chiefly one of combat fiction, as Kodos’s followers  execute crippling attacks against the city and the first responders or Starfleet, and are then hunted into the mountains by Lorca and company as Georgiou and her cohorts prevent an aerial escape.  The dynamic between Lorca and Georgiou, and the tension in their approaches – pragmatism and idealism – is developed throughout.

Although I have plenty of real Trek books to finish before I start any more DSC novels, I will probably try The Enterprise War, which follows Captain Pike and the Enterprise during the events of DSC-1.

Citizen, librarian, reader with a boundless wonder for the world and a curiosity about all the beings inside it.
View all posts by smellincoffee →
This entry was posted in Reviews and tagged Abrams and Kurzman Trek, Star Trek, Star Trek Discovery. Bookmark the permalink.