Are We There Yet?

Are We There Yet? The American Automobile Past, Present, and Driverless
©  2019 Dan Albert
304 pages 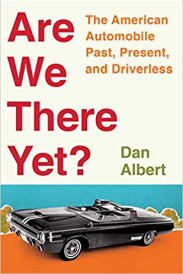 Are we there yet? I mean, at the end of the book?  Because it’s not fun.  Oh, sure, the author is trying to make it fun,  but….there’s such a thing as trying too hard.   When I picked this up, I was sold on the premise of a narrative history of American motoring which would end with a look at the prospects of autonomous vehicles. Just as in a tired, hungry mood I can be sold on a drive through burger and fries as a filling meal, though, once I finished this I was left feeling unsatisfied and annoyed at having spent money on it. At least in my case it was gift card money!

So,  what’s the problem with Are We There Yet?   Well, imagine being in a car listening to someone talk non-stop, someone who is so frequently distracted that they’re constantly veering into the other lane or threatening to sail into a ditch.   Albert is constantly wandering off to yak about Freudian psychology, or Marxist economics,  or working in as many pop cultures jokes as he can so  the book will be painfully dated in a couple of years. We return to the road, moving in the expected path, from Ford to Volkswagens and Nissans and so on —     but the distractions come again and again – and  our distracted driver keeps jumping ahead to talk about autonomous cars, long before their time has come, and by the time  the book reaches the autonomous cars section, it’s so general that there’s no real content to be had.

I read this wincing, grimacing, and sighing – and I say this as someone who loves reading about transportation history. Trains, canals, planes, the interstates, automobiles, horses, bicycles – if it moves, I’ll follow it and read a book about it!  But Are We There Yet   made me as bored and impatient as the child whose eternally-repeating question gave it a title.  A lot of its content was as sloppy as it was irrelevant, and I was astonished to read on the back cover that the author holds a PhD in history. I’d assumed he was a car guy pretending to be an historian.  I’m fairly certain I learned more about cars from Driving with the Devil,  a book about  Prohibition and NASCAR, than this.

Although there are useful bits of history here about the technical revolution of cars, it’s a safe bet there are better books out there –  presumably the Smithsonian’s Drive: The Definitive History of Driving, or Steve Parissien’s The Life of the Automobile would serve the curious. And there are at least three books just about autonomous cars to consider beyond this one.

Citizen, librarian, reader with a boundless wonder for the world and a curiosity about all the beings inside it.
View all posts by smellincoffee →
This entry was posted in history, Reviews and tagged automobiles, history, transportation. Bookmark the permalink.

3 Responses to Are We There Yet?