A Lesson Before Dying

Posted on November 15, 2019 by smellincoffee 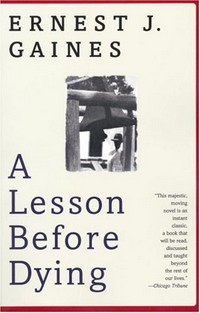 In 1940s Louisiana, a young black man named Jefferson is  sentenced to death, a victim of both circumstances and poor decisions.  In his defense, the state attorney announces to the jury — with Jefferson’s family in the audience — that the accused is so ignorant and slow that they can’t possibly  think him capable of executing a robbery and a triple homicide.. He’s so far from being a thinking man  like you or I, the defender claims, that accusing him of murder and putting him through the legal system is just as preposterous as say, putting a hog on trial.    Nevertheless, the accused is sentenced to death, and in the six months which remain in his life,  his family want the village teacher  to make a man out of their imprisoned son. Their plea: don’t let him go to the electric chair like a hog to the slaughter — let him die as a man, on his feet.

Grant Wiggins hardly thinks himself up to the task. How do you make a boy a man, anyway? And how do you do it from a prison cell?  Wiggins doesn’t want t obe in the state, let alone spend his time visiting the village jail. If it wasn’t for the love of a good woman, Wiggins would have left the plantation for anywhere else long ago.    Pressed by devotion and duty, however, he submits himself to the constant embarrassment of asking permission from the racist sheriff, and the constant searches of the prison’s deputies,  all in an effort to reach the doomed before his death.   Meanwhile, life goes on outside the prison, and the community of sharecroppers have to sit with the looming death of one of their own.

Although the presumed student of A Lesson Before Dying is Jefferson, the teacher is himself no less a student, as his time with the accused and the deputies makes him think about his own place in this society. He is an outsider — distrusted by the whites because of his education, not exactly trusted by the blacks because  the distance he keeps between himself and the church.  Yet he cannot deny being formed by this place, and rooted in it the way southerners of any color are.  And yet he fears if he stays, he will be broken in spirit — or  so desperate to escape it he will simply  flee, leaving his relations and community in the lurch as so many other men have done.

In the end, A Lesson Before Dying is a powerful story about an individual’s responsibility to himself, to choose to live, to  act in ways that honor himself, the truth, and  his loved ones.   Although the world is poorer for having lost Gaines this past week, I’m personally thankful that the occasion prompted me to read this title.

Related:
“Going Home“, an essay by Bill Kauffman on Gaines’ return to Louisiana
A letter-poem from Wendell Berry written to his friend and fellow southerner Gaines

Citizen, librarian, reader with a boundless wonder for the world and a curiosity about all the beings inside it.
View all posts by smellincoffee →
This entry was posted in Reviews and tagged American Literature, American South, Ernest Gaines, Southern Literature. Bookmark the permalink.