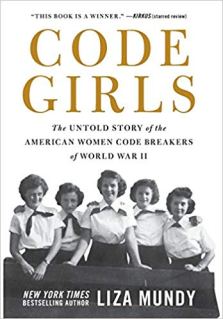 At the outset of World War 2, the United States’ military intelligence apparatus, much like its military, was minimal.  Following the Japanese Empire’s sneak attack at Pearl Harbor,   the desperate need for men, material, and intel to fight a global war on multiple fronts meant that bright women of ability previously hidden away in schools and libraries had an opportunity to serve their country and the free world.    Code Girls delivers an eye-opening history of WW2-crytoanalysis by telling the story of several communities of  young women who were instrumental in the success of the Allied war effort —  both in penetrating Axis codes, and in doing the kind of analysis that allowed the Allies to later pull off one of the greatest ruses of the war.

I’ve read numerous histories of the  Second World War which refer to the Axis powers’  codes as being broken fairly early on – Japan’s “MAGIC”  in 1942, for instance, allowing for the Battle of Midway – thus allowing for an Allied comeback despite Germany and Japan’s running start.  What those casual accounts overlook is that enemy codes were a red queen’s race:   they were complex and ever-changing, requiring constant work on the part of Army, Navy, and civilian contractors to keep up with.   Although there are quiet moments throughout the book – lulls between one code being broken and another, still more arcane one instituted, where the author focuses on the women’s  personal lives and the changing society during WW2  —   keeping pace with the enemy was a nonstop job that ended only with Japan’s surrender.

Mundy explores both the technical and personal sides of the codebreakers’ lives, explaining how a Japanese cipher might work, for instance, as well as communicating how personally taxing the job could be. Not only were young farm girls thrown into a growing metropolis, surrounded by strangers and suddenly expected to conform to a new culture, but they operated on enormously taxing problems under immense pressure:   they knew  first-hand how  dangerous the Atlantic their brothers and fathers were sailing in  was, despite the ready assurances from the newspaper that victory was just around the corner.  Although they would triumph –  the codebreaking community allowed the U.S. Navy to destroy two thirds of the Japanese merchant marine —  1942 – 1944 were horribly tense years, where many in the codebreaking community feared the Allies were losing. The women’s efforts were not limited to breaking enemy codes and allowing for operations like the aerial assassination of Admiral Yamamoto, the man behind Japan’s Pacific victories: teams  assigned to analyze American com traffic for vulnerabilities were able to build a representative model of what a given Army group might produce; this model was converted into fake chatter to convince Germany that a fictional army group was preparing both a feint into Norway, as well as a general invasion at Calais.   After the war’s end, not everyone retired into civilian life: some  used their new skills to good use in the early programming industry, working with Admiral Grace Hopper (see Broad Band).

The waiting list for this book at my library was six months long, and it was still worth it. As with Broad Band, this book should not be consigned to “women’s studies”, or regarded as just another effort to encourage girls to pursue  STEM classes.  Code Girls is genuinely interesting in its own right,  delving into a side of the war few are familiar with.

Citizen, librarian, reader with a boundless wonder for the world and a curiosity about all the beings inside it.
View all posts by smellincoffee →
This entry was posted in Reviews and tagged espionage and commandos, women, WW2. Bookmark the permalink.