Posted on August 9, 2018 by smellincoffee

Broad Band: The Untold Story of the Women Who Made the Internet
© 2018 Claire Evans
288 pages 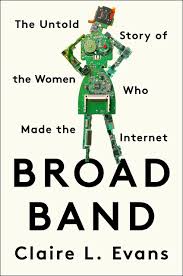 When the ENIAC was first displayed for the public, its proponents bragged that it could do complex mathematical calculations in seconds which would have taken a skilled man hours upon hours.   Well…baloney. The ENIAC was an admirably complex array of metal, but without the human beings who had pored over its every component, turning their brains into maps of circuit boards,  creating the very language that was needed to put that array of metal to work — it was useless. Hours and hours of human effort had gone into that little calculation, but they weren’t man-hours.   The programmers of the ENIAC were six women, descendants of the calculating computer pools of the late 19th century. Broad Band is their story, and the story of other lady pioneers of the computer age.

I’ll admit that I had no idea any of these women existed. Histories of of early computing and the internet are a favorite of mine, but I usually begin further along in the story, with more user-friendly machines like the PDP-10 and the advent of networks. I was a little leery of the book given the asinine blurb on the back — “alpha nerds and brogrammers”?  Really?  Thankfully, the funny title brought me, and glad I am because I never heard of these women…and some of them are really worth knowing.   Grace Hopper, for instance, was deeply involved in the Harvard Mark-1 and the UNIVAC, and she pionered the use of subroutines to speed up coding, as well as created the first compilers.    COBOL, which at one time was the language of 80% of existing code,  was based on her work.  A woman once refused admittance to the services during World War 2 because of her age would become a Rear Admiral before her life’s computing work was done. Another remarkable subject here is Elizabeth “Jake” Feinler,  whose Network Information Office created and maintained a directory of…the internet.  Working for the still-nascent ARPANet, Feinler was the master of all information about it. Her team also created many basic protocols, both under-the-hood things most users wouldn’t recognize as well as creating the original web extension: “.com”.   The women who follow were also trail-blazers, experimenting with social networks (New York’s “ECHO” bbs,  which could boast a  40% female population), as well as digital magazines distributed on floppy disks.  Surprisingly, ECHO is still around, though other projects like Word magazine are long gone.

Broad Band effectively mixes biography and tech history, and the goal from the start doesn’t overshadow the actual content.  That is,   most of the subjects should be included in histories of web regardless of their sex, given their importance. I say most because I’m not sure about the website creators of the nineties; I don’t know enough about the web at that transitional moment to read Broad Band in context.  There were some claims that seemed specious, like references to Al Gore being the key player in making the internet a thing known to the public, and  there’s a huge discrepancy in the estimate given for ECHO membership. Evans says it peaked at 40,000, while The Atlantic marks the peak as…2,000.  There’s no way of knowing which is more accurate,  but given that it was only accessible via a paid membership,  I’m tempted to think Evans’ is closer — she interviewed the ECHO host herself.   The meat of the book seems to get leaner and leaner as it wears on, until at the end we’re reading about how computers are couched in “masculine” language like…”crash” and “execute”.    Despite the late-game weaknesses, there’s a lot of fun information here about how the web as we know it evolved.

Citizen, librarian, reader with a boundless wonder for the world and a curiosity about all the beings inside it.
View all posts by smellincoffee →
This entry was posted in history, Reviews and tagged biography, history, internet, women. Bookmark the permalink.