This weekend has seen me reach the end of Red Dead Redemption II. I have never been as moved by the ending of a game, or by a videogame protagonist. The sheer depth of this game — so much so that its credits rolled for thirty minutes, and I was happy to watch because of the glimmers of story that continued to be revealed throughout —  puts it in a class by itself, in my opinion.   No videogame, and precious few actual movies, have had character drama this good.   I bought a PS4 just to play the game, and I don’t regret it a second. I look forward to continuing to explore this amazing world Rockstar created, but now that the first flush is over — time to go back to reading! 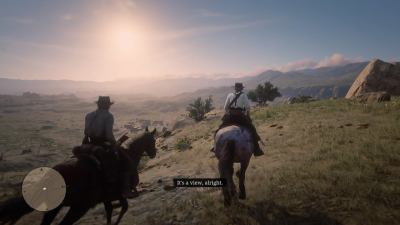 Citizen, librarian, reader with a boundless wonder for the world and a curiosity about all the beings inside it.
View all posts by smellincoffee →
This entry was posted in General, Uncategorized. Bookmark the permalink.

4 Responses to So it goes