Posted on September 4, 2018 by smellincoffee 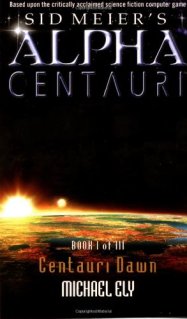 Earth was a sad memory for the crew and colonists of the good ship Unity, who fled its radioactive remains in hopes of building a new society near a not-too distant star, Alpha Centauri.  But an unexpected assassination brings the fears of the past alive once again, and when Unity arrives at her target, she no longer lives up to the name. Instead, the people of the dying colony-ship  cling to like-minded ideologues, and the sorry spectacle of human history begans to unfold again, this time on a planet covered in mysterious xenofungus and populated only by mind-destroying worms.

Such is the premise of Sid Meier’s Alpha Centauri, a turn-based strategy game that compels a player to pick a faction and see them through to victory. The sequel to  Civilization II, SMAC remains one of the best-critically received PC games of all time — holding, for instance, the PC Gamer record with a score of 98%.  It was a logical successor to Civ 2, which allowed players a ‘peaceful’ victory if they built a colonyship and sent it to Alpha Centauri.   While the traditional Civ games have players choose a civ to play as — the Persians, the Japanese,  the Aztecs, etc —   SMAC’s factions were sorted among ideological lines, championing religion, science, capitalism,  miltarism, etc.   Unusually for an open-ended “4X” game like this (explore, expand, exploit, exterminate), SMAC  had a plot which would develop as the player played, learning about the planet “Chiron” — specifically, learning that the planet is alive, with a collective consciousness,  and  that the constant attacks on human outpost by mindworms were a response to the constant terraforming.  The story of Alpha Centauri — the human in-fighting amid the alien world’s exploration — is presumably the setup for the trilogy of novels written about them.

This first novel, Centauri Dawn, only covers the ship breaking up into factions, and the first decade of life on the planet as a few of the colony pods find one another and try to maintain some semblance of unity despite tensions over resources.  Not all of the factions feature here, as the first novel focuses on the conflict between the UN Peacekeepers — the alleged ‘government’ of all the settlements — and the Spartans, who are militarists.  The Gaians, who are…tech-hippies, feature, and  the capitalists and religious fundamentalists also make an appearance. Mysteriously absent is the Human Hive,   which  is a totalitarian society with obvious Chinese influences. (They’re supposedly based on the Chinese philosophy of Legalism.)   The Hive does appear in the second novel, however.

If you are interested in a storied playthrough of the game, I found a good one on the Let’s Play Archive. The player chose the Gaians, who are supposedly the easiest faction.  Also,  just for flavor, I’ve inserted the Spaceship victory cinematic from Civ 3 below, as well as the intro video for SMAC. Also,  in the last few years another SF 4X game called Beyond Earth was intended as a spiritual successor to SMAC. It wasn’t anywhere near as critically acclaimed, but it does have some interesting elements.  Here’s a review if you’re interested!

Citizen, librarian, reader with a boundless wonder for the world and a curiosity about all the beings inside it.
View all posts by smellincoffee →
This entry was posted in Reviews, science fiction and tagged arts-entertainment, science fiction. Bookmark the permalink.