Reads to Reels: Ready Player One

Posted on August 1, 2018 by smellincoffee 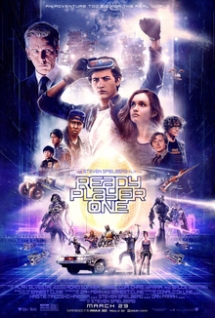 The Redbox technician hadn’t long placed copies of Ready Player One in my local machine before I eagerly rented one. I experienced the  book a few weeks back, enthralled by the story and Wil Wheaton’s delivery of it,  and so launched into this with a stupid grin on my face as the move rolled to Van Halen’s “Jump”. It didn’t take me long to realize this wasn’t the story I’d  experienced, but knowing that adjustments have to made for the sake of different mediums, I  resolved to enjoy it nontheless.

As a movie it’s a perfectly fun action-adventure thriller with a bounty of pop-culture references.  The acting is fine, and the production seamessly integrates live-action scenes and characters with pure-CGI ones, since the characters themselves spend most of their time within a computer-generated gameworld called the Oasis.  For those who haven’t read the book,  Ready Player One is set in the near fuure in which everything has gotten worse: poverty, unemployment, the environment, pick your poison. What has improved is massively multiplayer online games, and the only one that matters is the Oasis.  There players can appear  however they like, and visit planet after planet of adventures and activities.   Aside from eating, sleeping, and excretion, everything is done in the Oasis.     When the creator of the Oasis dies, his will invites the entire world to a treasure hunt. He’s hidden an Easter egg somewhere in the Oasis,  accessible only to those who find three concealed keys guarded by riddles and challenges.  The reward? Control of the Oasis and trillions of dollars.  Not bad.

While I’m actively resisting the urge to compare the movie too much for the book,  that is in fact the whole purpose of Reads to Reels: to comment both on adaptions’ worth in themselves and as re-tellings of literary originals.  The broad outline of the RPO novel and movie are the same, as are its characters — but the story told is much different. The movie opens with a drag race,  something oddly out of place in the novel’s  fantasy-questing theme. The entire atmosphere of the book — the massive revival of eighties culture inspired by global study of Halliday’s own fixation on his childhood — just isn’t there.  Those who watch the movie without reading the book will probably find the eighties soundtrack a little odd, because there’s nothing to explain it.

In fairness to the movie, though, the author helped with this screenplay and the mediums of book and cinema have different demands. A big-budget production couldn’t have a plot with a lot of pondering over intricate riddles and fooling with text-based games, let alone a sequence where a character has to log into a TRS-180 and play Zork. It’s a lot easier to sell a race laden with T-Rex and King Kong as obstacles instead of an eight-bit arcade game as the challenge, I get it.  Ditto for the emphasis on action drama (the lead characters are in mortal peril for pretty much the entire movie), instead of Parzival’s  relationships with his friends, the turmoil their bonds undergo, and the growing realization that a planet lost in the Oasis is just..wrong.  Instead we get action-adventure and then we’re hit with the reality/unreality moral  with all the subtly of a baseball bat.

While Ready Player One is a fun action movie, one I wouldn’t mind watching again,  it doesn’t succeed as an adaptation of the original for me.

On a side note,  I was amused that my mental image of the villain, casting him as Ben Mendelsohn, proved to be on the nose, as he appears here as the big bad. (I was mostly inspired by his performance in The Dark Knight Rises.) I didn’t care for the characters in-game avatars, particularly Art3mis, but that’s subjective. I imagined her as the hero of Dungeon Siege:

Citizen, librarian, reader with a boundless wonder for the world and a curiosity about all the beings inside it.
View all posts by smellincoffee →
This entry was posted in Reviews, Uncategorized and tagged reads to reels, science fiction. Bookmark the permalink.

2 Responses to Reads to Reels: Ready Player One