Posted on December 25, 2017 by smellincoffee 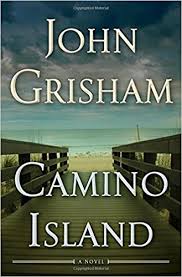 Mercer Mann thought she’d reached the bottom of her career. After publishing early, and young, she’s floundered ever since, and keeps herself eating — and keeps the creditors for her $60,000 in student loans at bay — by teaching English lit to disinterested freshmen.  But now…she’s lost even that. She’s officially an unemployed and soon to be homeless writer. Happily, however, a discrete insurance firm who is trying to track down some priceless and recently stolen manuscripts from Princeton University has a job for her.   They want her to return to her childhood home of Camino Island, Florida,  and — under cover of taking the summer off to write a book — get to know one Bruce Cable, owner of Bay Books, owner of many seersucker suits, don of the local literary set, and suspected architect of a twenty-five million dollar heist.  Her mission: get as close to him as possible, find out if he’s their man, and obtain any information that would help recover the books.

Camino Island is a confused novel, despite having one of Grisham’s more interesting setups. It opens with a heist and closes with the police and lawyers, but  the seventy percent in the middle reminds me a little of The Last Juror, in that the  meat of the story lays in the goings-on of a community of eccentrics, in this case all writers, publishers, or (in Bruce’s case) those associated with the bookstore. Bay Books is the community center, housing not only the bookstore but a popular cafe, and despite its size it attracts all manner of authors, from Stephen King to Scott Turow.  Mercer’s spy mission involve fewer tuxedos and gadgets and more trying to hold her daiquiries during long dinners in which writers  gather to encourage or mock one another as they struggle to get their stories out. As Mercer gains more acceptance with the locals, she begins learning about the rare book trade — and that, combined with the fact that so many of the characters are book-lovers, makes Camino Island of immediate interest to those of us who genuinely love books and literature.  The appeal of the novel is mostly in the setting, however, as none of the characters have a full “story”: they’re merely characters with small stories that  intersect at times, but don ‘t really cohere into some grand narrative. Mercer, the closest thing we have to a main character, disappears in the last few chapters of the book, and I almost didn’t mind. Frankly, the only character who is remotely interesting in Bruce, who turns a struggling bookstore into a community center and does most of the legwork that keeps it alive by working there six days a week — despite being wealthy with shady friends.

Although Camino Island‘s organization leaves much to be desired, I enjoyed the literary theme enormously. I received it as a Christmas gift this morning and just finished it off, so it was a good story…just a weirdly organized one.

Citizen, librarian, reader with a boundless wonder for the world and a curiosity about all the beings inside it.
View all posts by smellincoffee →
This entry was posted in Reviews, Uncategorized and tagged Florida, John Grisham. Bookmark the permalink.